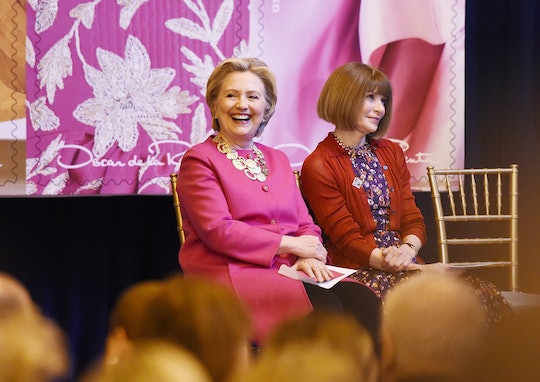 Tuesday night, President Donald Trump delivered a speech to a joint session of Congress — not quite a “State of the Union”, but basically a State of the Union. Of course, he did it his way, with his usual quirks and trademarks commentary. And while former Kentucky Gov. Steve Beshear delivered the Democratic party’s formal response to Trump’s remarks, many were expecting that there would be some sage words from former presidential candidate and Secretary of State Hillary Clinton as well, to cap off the night. Clinton’s sass, critiques, and words about the Trump administration since the election have been eviscerating in their own way. While still measured, she clearly hasn’t been holding back, but her latest riposte — or rather, the lack thereof — was an important exception: Yes, Hillary Clinton’s response to Trump’s State of the Union was silence, but it was still sort of what America needed, in the best way.

Although during the actual election cycle, Clinton’s tweets definitely served up their own level of sass and truth bombs (“Delete your account” anyone?), since her devastating Electoral College loss to Trump in the general election, Clinton has apparently had fewer qualms about letting her own voice be heard via Twitter. And, honestly, her candid take on the political happenings in our nation are greatly appreciated.

Surprisingly, though, Clinton has yet to give a response to Trump’s address on Tuesday night, and honestly, it's perfectly fitting for the tumultuous times in which we seem to be living: In her refusal to speak out, Clinton took the high road, seeming to be allowing Trump a little room for neutral press and a bit of praise where it was warranted, as some argued. And even if she disagreed with the content of his measured, yet still-divisive speech, she knew that it wasn't the time to drag him across the coals.

Since the election, Clinton has become somewhat of a symbol for both feminist and Democratic hope, as well as an unfortunate portrait for what happens when divisions get the best of us. Her message of silence, truly shines a light on that hope that the Democratic party seems determined to work toward — unity and political understanding — and serves as a welcome boost for morale. While many touted Trump's speech on Tuesday night as the first instance of him acting presidential, there were still some issues with his remarks, and Clinton's silence echoes that sentiment, while still seeming to comment on the need for cordial political concession where it's warranted.

Clinton hasn’t been shy about her apparent opposition toward the majority of Trump’s policies in recent days — not to mention Trump himself, especially in regards to his travel ban and the rising number of alleged hate crimes that have taken place since the inauguration on Jan. 20. Clinton has her own way with words, balancing between the strong and steady motherly figure, and the passionate feminist and advocate her voters know and love, and she’s already made extremely clear that she does not approve of this administration, despite her attendance at Trump’s inauguration.

Clinton’s most popular tweet since Trump began his term was simple, short, and to the point. After the 9th Circuit Court of Appeals denied Trump’s case seeking to reinstate his travel ban, Clinton’s response of “3-0” was perfectly poignant. She was, of course, referring to the three judges who voted down the petition, and while it was a bit edgier than her other messages, it still managed to do its job in terms of setting the tone for what many were feeling at that moment, type-form: removed, but not distant. Vague, but perfectly clear. The exact opposite of Trump’s own Twitter feed.

Clinton’s lack of a response to Trump’s address on Tuesday night itself spoke volumes. Trump may have seemingly won over many opinions with his speech, but overt approval or criticism was unnecessary; His speech may have been his most well-delivered since he announced his candidacy, but our standards for what is "presidential" and acceptable shouldn't be lowered based on his past behavior. Clinton's decision then to remain silent, waiting for what tomorrow will bring — whether it be another travel ban, or the stripping of rights for transgender students — is both graceful in it's lack of harsh political critique, generous in that it allows Trump a bit of breathing room, and meaningful in its complexity.

More Like This
Sheryl Lee Ralph's Husband & Kids Are Her Biggest Cheerleaders
Philadelphia Eagles Wide Receiver A.J. Brown Says His Kids Give Him “Strength”
Everything You Need To Know About Chris Stapleton’s Wife & Kids
Bluey's Mom Chilli Graced The Cover Of 'InStyle' & It's The Recognition She Deserves
What Parents Are Talking About — Delivered Straight To Your Inbox