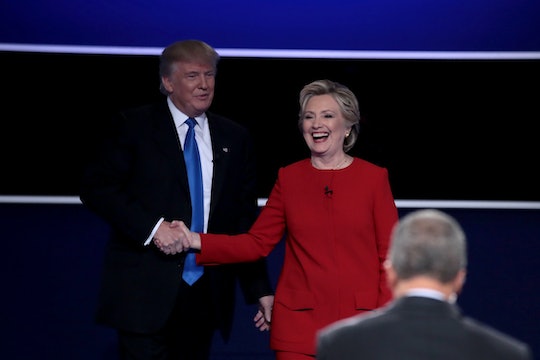 The evening started off with a zing, when she called Trump's economic policy "Trumped up trickle down," and it only got more barbed from there. Neither candidate was pulling any punches, but if we're talking points, Clinton landed a lot more than Trump did. She went on to say, smiling, that Trump lives in his own reality, but the facts are the facts. When Trump accused her of not having a plan, she responded serenely that she did, in fact. She wrote a book about it. She repeated her position that a man who can be provoked by a tweet should not be allowed near nuclear weapons. She said that not just police, but everyone suffers from implicit bias.

For his part, Trump mostly just barked "wrong" or "untrue" or simply rolled his eyes while Clinton spoke, and generally came across as unprepared and at a complete loss for words, while Clinton was confident, prepared, and graceful under a barrage of Trumpisms.

Twitter wasn't the only place where it was clear who won the debate. Immediately following, political scorers called it a clear victory for Clinton, according to the Los Angeles Times. While Trump was all bluster and mutterings, he spent most of his time on stage ineffectually dodging Clinton's well-aimed attacks. The Tampa Bay Times perhaps most succinctly described this by saying, "The difference between an experienced public servant and a billionaire reality television star could not have been clearer."

Unfortunately, even a Clinton victory as clear-cut as this will be unlikely to truly sway some hardcore Trump supporters. For as much as Clinton seemed to win by most political standards, the Trump section of Twitter was just as loud in their insistence that Trump actually won, or that Lester Holt was somehow in Clinton's pocket.

And this is even after Trump blundered and left people wondering if he still does not pay any taxes. If you remember, Clinton slammed him for this and he responded "That makes me smart."

Perhaps Trump will come to the next debate better prepared. But even so, I somehow doubt he'll be able to last any better against Clinton, who is both a seasoned politician, and as we saw tonight, one hell of a debater.