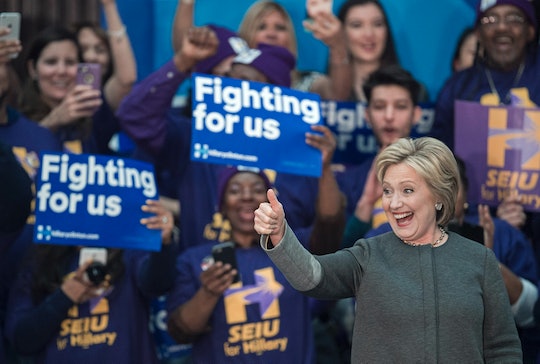 Former Secretary of State Hillary Clinton addressed her supporters from her Florida campaign headquarters on Tuesday night, after it was announced that she had won the Democratic primaries in Alabama, Arkansas, Georgia, Tennessee, Texas, and Virginia. The wins come as no surprise, as Bloomberg reported that Clinton was projected to win every Super Tuesday Democratic primary, with the exception of Vermont, the home state of her opponent, Vermont Sen. Bernie Sanders. It also comes as no surprise that Hillary Clinton's winning Super Tuesday speech was inspiring and gracious.

During South Carolina's primary, Clinton proved to be popular with African-American voters, and that held true in Georgia on Tuesday, where she won over 80 percent of the African-American vote according to exit polls, reported ABC News. Nearly half of the Democratic primary voters in Georgia are African-American. Sanders, meanwhile, is more popular among white liberals, and was therefore projected to fare better in Northeastern states such as Massachusetts and Vermont.

Clinton also won the women's vote at a ratio of two to one in both Virginia and Georgia. Women made up the majority of voters in both states. And, of course, Arkansas was no big surprise, as Clinton is also the former First Lady of the state, which still holds good will for both the former Secretary of State and her husband, former President Bill Clinton.

The theme of Clinton's speech was "breaking down barriers," a phrase that she repeated over and over, surely a veiled reference to Republican hopeful Donald Trump's insistence that America should build a literal wall to keep Mexicans out (and make them pay for it). After congratulating Sanders on his "strong showing and campaigning" (he's projected to win Vermont and Oklahoma, good for him!), Clinton thanked her donors, most of whom contributed "less than $100." Nice to see that Maddi got a shout out.

Clinton's message was one of inclusivity. "This country belongs to all of us," she said. "Not just those at the top, or just to people who look one way, worship one way, or even think one way." Her most direct dig at Trump was the dismissal of his campaign slogan, "Make America Great Again." Clinton argued that "America never stopped being great," and was briefly interrupted by chants of "U.S.A.!" by her supporters. So if it ain't broke, what does she propose to fix? "We have to make America whole," she went on to explain. "We have to fill in what's been hollowed out." She continued:

I'm going to keep saying it: I believe what we need today is more love and kindness because you know what? It works. Instead of building walls, we're going to break down barriers and build ladders of opportunity and empowerment.

Clinton also chastised the right wing for "trying to divide America between us and them", and, in reference to her visit to Boston on Monday, pondered what the members of the original Tea Party would have said about the crushing student debt facing college graduates these days. Perhaps they would have advised them to throw their diplomas in the harbor?

Clinton also touched on the shrinking middle class, clean energy, and creating more U.S. manufacturing jobs before returning to the "breaking down barriers" theme, specifically the barriers facing women who deserve equal pay for equal work, and "hardworking immigrants everywhere who are too often exploited and intimidated." Clinton said that her family and her faith informed her positions, quoting a Methodist saying: "Do all the good you can, for all the people you can, for as long as you can."

She also touched on the water crisis in Flint, Michigan, where children were poisoned with tainted waiter "because their governor wanted to save a little money", Clinton claimed. But once again, Clinton managed somehow to turn the story into one of inspiration, praising the volunteers and donors in Michigan who are working hard to help their neighbors recover from the tragedy.

Listen, Democrats, I know we'll never have another Barack Obama, who sprinkles Star Wars references and Al Green lyrics into his speeches. An orator like that comes along once in a lifetime. But if you're looking for a candidate whose words make you want to wrap yourself up in an American flag and hug your neighbor, Clinton's one hell of a motivational speaker.