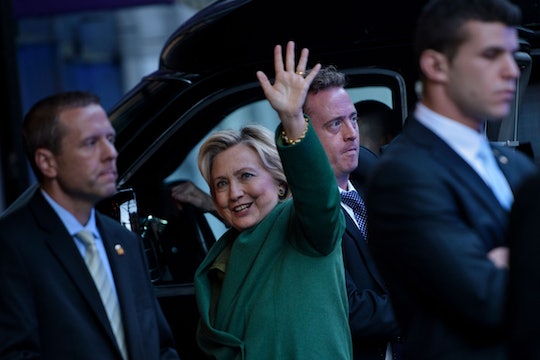 On Monday night's presidential debate, the first of this election cycle, the night opened with a question about the economy from moderator Lester Holt. The candidates both answered basically how one would expect them to. But Hillary Clinton's "Trump'd up trickle down" comment was her first zing of the night. And I mean, that's the real reason we're all watching, right?

This conversation really got going when Trump responded to the question by saying that he would create more jobs than has been seen since the Reagan era. Without missing a beat, Clinton jumped on this by arguing that Trump would indeed follow in Reagan's footsteps by espousing "trickle down economics" which famously cuts taxes for the very rich, and nothing for the lowest earners in the country. She calls it "Trumped up trickle down." Zing!

While Donald Trump's economic policy seemed to focus mostly on the evils of China and Mexico, etc. Clinton was clear in her plan to increase taxes only for the extremely wealthy. But the barbs didn't stop with this. At every attack, Clinton mostly just smiled serenely, nodded, and occasionally swung back with a well-timed and well-aimed zinger. Soon after she coined the sure-to-be-hashtagged phrase, she responded to one of Trump's interruptions with, "We know you live in your own reality." Boom!

The debate did not any more civil as the night went on. And Clinton was not the only person shooting off barbs. To each of her criticisms, Trump responded mostly by saying that he was just using smart business practices. He also said that he would release his tax returns when Clinton releases her 30,000 deleted emails.

While Trump repeated over and over that his "tremendous" success in business qualifies him to win the election, Clinton reiterated her stance of being in favor of small business, speaking often about her father, who provided a good middle class life for her and her family, but was not at all wealthy. That is, when she was able to speak without being interrupted.

The debate ended up feeling less like a debate and more like a squabbling match, though by no means was it an equal fight.