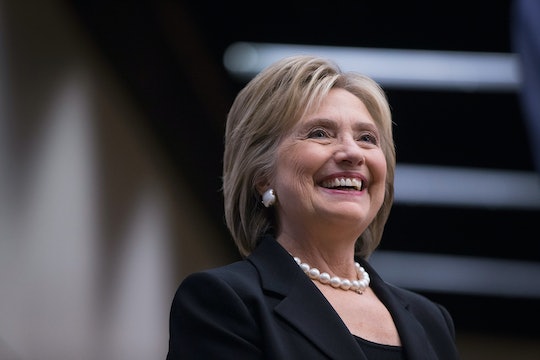 The ABC Democratic debate Saturday night covered a slew of issues, but it focused heavily on national security and international counterterrorism efforts. Former Secretary of State Hillary Clinton gave such detailed answers about what she would do to help fight terrorists in the Middle East that her answers were probably lost on many Americans. But Clinton's tweets during the ABC Democratic debate cleared up what her counterterrorism goals are, while also diving into gun control and other "issues the American people care about," according to her Twitter.

The candidates answered questions about putting troops on the ground to help destroy ISIS, whether we should work with Russia to combat terrorists, and what they think about instituting a no-fly zone, according to The Guardian. Clinton's answers were well-spoken and incredibly detailed. For example, she said she a no-fly zone would provide a refuge for refugees while also providing the U.S. with leverage against Russia and Russian-backed Syrian dictator Bashar al-Assad, according to the Guardian:

Because those kinds of international political details are hard for most people to follow, Clinton tweeted out her general goals for combating ISIS and putting pressure on Russia.

And, of course, she even spun her grueling Benghazi hearing into something positive.

Then — for the first time in any of the Democratic debates — she and Vermont Sen. Bernie Sanders actually started attacking each other directly, both on Twitter and at the actual debate.

Clinton also retweeted a tweet from The Briefing on Sanders' health plan.

And then there was this particular mic drop moment from the candidate, after Clinton was asked a bizarre question by moderator Martha Raddatz about whether the role of the President's spouse should change, noting that previous first ladies were relegated to picking China.