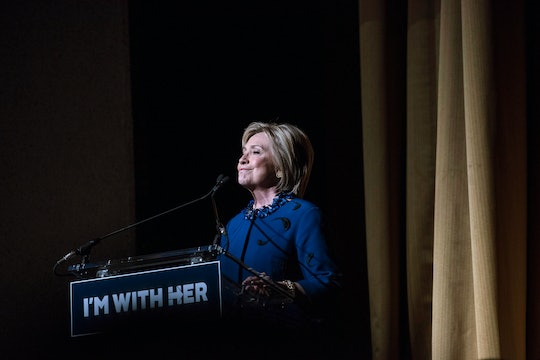 Hillary Clinton’s Voting Record On Paid Family Leave Is Good, But Her Policies Need To Be Clearer

As the race between presidential candidates former Secretary of State Hillary Clinton and former Vermont Sen. Bernie Sanders heats up, their policy platforms are coming under more scrutiny. Though both Democratic candidates support some form of paid family leave, their proposals have major differences. Sanders has remained relatively static in his position on this issue throughout his career, but what is Hillary Clinton's voting record on paid family leave?

Paid family leave is becoming an increasingly important topic in this presidential election. When campaigning in Iowa, Sanders requested that "every candidate running for president" give their opinion on the Family and Medical Insurance Leave Act, sponsored by Sen. Kirsten Gillibrand. He's attempting to put Clinton in a political bind. The bill would allow for 12 weeks of federal paid family leave, but it would be funded by a tax increase, something that Clinton has disavowed. By endorsing the bill, she would be contradicting herself.

To be more specific, Gillibrand's bill would necessitate a hike in payroll taxes by about $1.38 a week for the median wage earner. Clinton has already used Sanders support of the bill against him. During a democratic debate, she said, "Hard working, middle-class families need a raise, not a tax increase." Instead of being caught in Sanders' trap, she proposed her own solution "without raising the debt, without raising taxes on the middle class." One of her aides told CNN that "Hillary Clinton has already said she supports 12 weeks of paid family leave, but she supports a different way to pay for it and so will be outlining additional ideas for ensuring the wealthiest Americans pay their fair share." It's unclear from her website who exactly that would target, but she has said it would be “a combination of tax reforms impacting the most fortunate.”

As for her history with family leave, Clinton was First Lady when the Family Leave Medical Act (FMLA) was passed in 1993, so she did not vote on it. Though the act allowed anyone to leave work for up to 12 weeks to take care of a new or sick family member, there were a number of stipulations. First, only three states offered paid medical leave. And, you have to be an employee of a company composed of more than 50 people. Clinton's proposal has many of the same stipulations. For example, employees must also have worked for a company for a certain number of hours (how many is not specified). She has not said whether employees of small businesses would qualify.

The issue has become a major talking point for her on the campaign trail, especially as she tries to win over more young women voters. Sanders will, no doubt, continue bringing up the issue as a way to show their differences in policy. Though Clinton is trying to appeal to the middle class with her plan, Sanders questions that logic. Think Progress reported that he said, “Medicare is strong because we’re all involved in it. Social Security is strong because we’re all involved in it. This isn’t a tax that could be repealed in a few years.”

Though both proposed plans would be an improvement on the current lack of paid family leave, both would also maintain the U.S.' rank behind most of the world. Parents in the U.S, even with these contested reforms, would get less time off than parents in Bangladesh, the Democratic Republic of Congo, and Vietnam. As far as progress goes, the bar is pretty low.