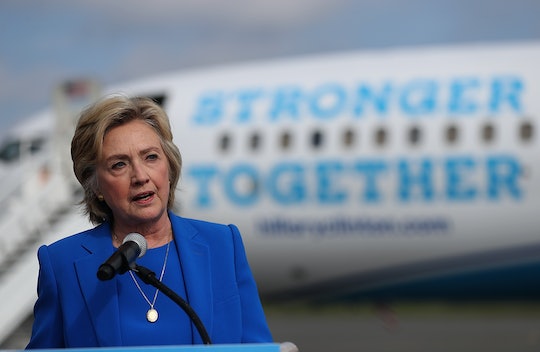 While campaigning to be Commander in Chief, Democratic presidential nominee Hillary Clinton answered for her past, her present, and her personality. When voters are focused on a candidate's intentions and plans for the path ahead, it can be easy to lose sight of an individual's personal history. But in an interview for Humans of New York, Clinton candidly explained that her reputation for being "cold" is rooted in carefully-cultivated resilience. Before she entered politics, Hillary Clinton's work on children's rights marked her transition into public service, and whether one supports her as a presidential candidate, Clinton's life after law school is worth revisiting, if only to find out more about her lesser-known work.

A student at Yale Law School in the 1970s, Clinton attended a speech by activist Marian Wright Edelman; according to Clinton's campaign website, Edelman's message had a major impact on the student. Ultimately, the speech propelled Clinton into public service:

Something clicked in my brain that day. Until I heard Marian speak, it wasn’t clear to me how to channel my faith and commitment to social justice to try to make a real difference in the world. But she put me on the path of service.

Clinton secured a grant to intern for Edelman, then spent her summer collecting information from interviews that supported health policy for migrant workers. In 1972, her work with Edelman zeroed in on children: Clinton's initial undercover investigation of school segregation in the South led ultimately to a position with the Children's Defense Fund (CDF).

As a staff attorney, Clinton's first major project led her to investigate why so many kids weren't attending American schools in the early 1970s; A press release from CDF indicated that the outcome of her investigation was the report, Children Out of School in America. CDF found that 2 million kids didn't get an education as a result of the discrimination of segregation, poverty, and the unwillingness of schools to accommodate children with special needs, according to The Boston Globe. The report paved the way for the Education for All Handicapped Children Act, later renamed the Disabilities Education Act, CDF reported.

After Clinton's time at CDF, she went on to be a congressional committee aide in D.C. and worked at a private law firm in Arkansas, but The Boston Globe reported that she remained committed to helping kids. She served as chairman of the CDF board for years; And though her career didn't focus solely on young people, she still advocated on behalf of children throughout her time in politics.

When former President Bill Clinton was governor of Arkansas, he asked the first lady to chair the Arkansas Education Standards Committee. Later, when she was first lady of the United States, Clinton worked to secure support for the Children's Health Insurance Program (CHIP), The Washington Post reported. Though the extent of her involvement in CHIP's creation is questioned, it's believed that she may have helped promote CHIP within the White House before more publicly supporting it when it rolled out nationwide.

Clinton's work as a lawyer and a policymaker is divisive, but her recent Humans of New York interview served as a reminder of how hard she's had to fight to be able to work in law and politics, and subsequently fight for children, at all. After describing the criticism she and other female prospective lawyers got from men taking the law school admissions test, she described how that kind of experience influenced her persona:

I know that I can be perceived as aloof or cold or unemotional. But I had to learn as a young woman to control my emotions. And that’s a hard path to walk. Because you need to protect yourself, you need to keep steady, but at the same time you don’t want to seem ‘walled off.’ And sometimes I think I come across more in the ‘walled off’ arena. And if I create that perception, then I take responsibility. I don’t view myself as cold or unemotional. And neither do my friends. And neither does my family. But if that sometimes is the perception I create, then I can’t blame people for thinking that.

Exploring Clinton's early career reignites understanding of her true sense of humanity. Because whether one stands with her politically, her early commitment to children reveals a bit about why she entered public life in the first place. Clinton may not always be the most approachable candidate ever, but it's her actions — not her appearance — that matter. And in that sense, she's succeeded.