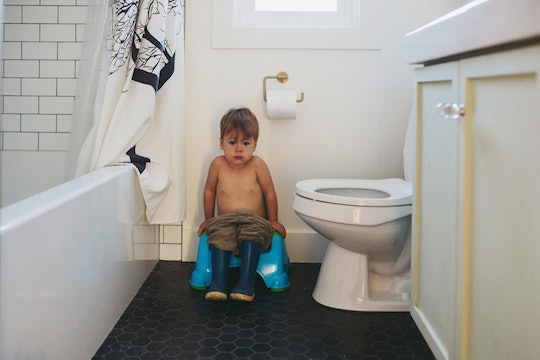 'Weird Parenting Wins' Proves That You Know What You're Doing, Even If You Feel Clueless

I once passively looked on as a drunk British woman stroked my baby's nose until she fell asleep in the Ergo carrier. It wasn't something I had read about in any parenting book, but it was a trick Hillary Frank, the author of Weird Parenting Wins and creator of "The Longest Shortest Time" podcast, also stumbled on as a parent flailing through early childhood. Her new book is part-memoir and part a crowd-sourced journey through surprise techniques to get your child into the bath, or out of the bath, or to poop in the potty, or to welcome their new sibling. Frank began to collect them after posting to the Longest Shortest Time website, and being inundated with great, often wonderfully irrational hacks from listeners around the globe.

One parent was on a hiking trail and passed a small girl happily marching along, circling red lipstick around and around her mouth. Her face was evidently covered in red lipstick. "She's allowed to wear as much lipstick as she wants when she hikes," explained the girl's mother. The perfect hack. Another parent froze bath toys into ice cubes to motivate a reticent toddler to get into the bath, where they could watch them melt. I won't explain the inner workings of the "pee soup" trick to get young boys to all go potty before leaving the house — just, you all know where to get the book.

What makes Weird Parenting Wins so joyful to flick though is the realization that in your most desperate moments, you might just be doing something right. Indeed, the project grew out of a rough start to parenthood for Frank. "It just felt like I was at the most vulnerable part of my life, just barely embarking on parenthood, and I had already failed," she says by phone to Romper. "I found that at every turn, all these [parenting] books were making me feel like a failure."

I do think it's important to give parents ownership over their own ability to parent.

A couple of months on, having faked it enough to begin to make it, she began to squirrel away a little bit of confidence.

"As I came out of the fog of early parenthood, and started to discover my own techniques that were working and spoke to other people about the techniques they had discovered, I realized a lot of what we were doing wasn't in the books, and was pretty unusual and funny."

And there is real wisdom there. Reading about a new mom dealing with a jealous older sibling who pretended she "lost" the baby, allowing her firstborn to swoop in as hero when he "found" his little brother sitting in his carrier in a bedroom, I had a glint of recognition back to some psychological theory the parent accidentally hit on. Various parenting manuals have attempted to distill these theories into easy-to-remember mnemonics, but there, tub-side at bath-time, I'll be damned if I can remember whether or not my child has attained theory of self to the point I can reason with her about stealing the naked Elsa doll, that plastic face smiling beatifically, from her younger brother. When my little naked son wants to ride his naked sister like Seabiscuit, I don't need to know if it is developmentally appropriate; what I need is to let my brain rustle up a good distraction: Hey! The bath is lava! AHHHH!

In that sense, the book doesn't just give you a hulking bag of tricks to use with your kids, it gives you back a little bit of power. (Sorry, Piaget.)

"I do think it's important to give parents ownership over their own ability to parent," says Frank. "And not only to feel confident but to feel creative, because I think it can feel like, 'Well, we have to find the right book that tells us the right steps to raise this baby.'"

As Mary Schmich's words in "Everyone's Free (To Wear Sunscreen)" noted, advice is a form of nostalgia, and reading about the diabolical alter-ego, "Leslie," Frank used to taunt her brother as kids, I didn't just feel better about my parenting, I was allowed the chance to believe that my own life experience might offer me some material for parenting success (why is it we feel we know nothing on the day we meet our kids for the first time?). The geniuses in this book are all other parents, muddling through, often heroically.

Frank's daughter is soon to turn 9, so the repertoire has changed — her family has moved through one longest shortest time after another, as she explains in the book. That said, not all parental dark magic goes out of style so fast: "One trick that I have that I use when my daughter has a playdate, it's really simple but if the kids are getting out of control or are arguing a lot, I am still able to do a headstand — like a tripod headstand, so if I randomly do a headstand, I do it really slowly, and lift up to the sky, then they are watching and trying to do headstands, too."

For me, whole book was inspiring. "Good for you for being persistent," a doctor who speaks "with the distinct cockiness of a guy who fixes vaginas for a living" tells Frank during a story about sexual dysfunction after childbirth, and it could just as well apply all of us parents. Yes, we fail. But we also get small things right ("lavaaaa!").

"I'm no longer dealing with a daily worry of whether she's going to bite me," Frank says of parenting her daughter almost nine years on from that first blog post. "I told her the other day that she used to bite me and she thought it was so funny, but now I worry less about my relationship with her and more about her relationship with the world, and that I have less control over."

Those with young children will get to that stage eventually; until then, there is "goblin pee"* to get you through potty-training.

Weird Parenting Wins by Hillary Frank is out now from TarcherPerigee.