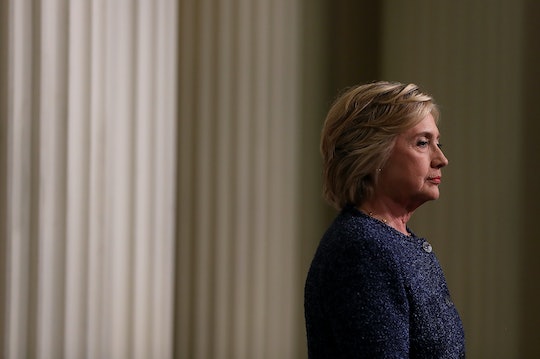 #HillarysHealth Is Fine & Not Political Fodder

After Democratic presidential nominee Hillary Clinton left a 9/11 ceremony early on Sunday, helped into her van by Secret Service agents, people were quick to jump online and express concerns about her health. Some of the comments on Twitter, however, seemed more determined to paint Clinton as unfit for the presidency than concerned with her wellbeing. The trending hashtag #HillarysHealth was used to spread theories theories about Clinton's health, including allegations that she was concealing a serious illness (Parkinson's, strokes, brain damage, and memory loss were all tossed around as viable options).

The thing is, according to Clinton's physician, the Democratic nominee is doing just fine. Ongoing health problems for Clinton have included only hypothyroidism and allergies, both of which have been managed without issue. Clinton's physician also attributed her early departure from the 9/11 ceremony on Sunday to a case of pneumonia and dehydration, neither of which sound particularly outlandish for a busy, campaigning presidential candidate. If we're judging by the professional opinion of a doctor who has actually examined Clinton (which seems like the most sensible option to me, really), #HillarysHealth is doing just fine.

The rumors, however, have made excellent political fodder. With the general election less than a month away, supporters on either side are reaching for absolutely anything as ammo against candidates — and it seems like that's exactly what Clinton's health is serving as now.

According to The New York Times, most national polls now show Clinton one to six points ahead of Republican nominee Donald Trump, and recent attacks aimed at Clinton's health seem mostly like an attempt to sway any voters still on the fence. Whether that's the best tactic to employ at this stage of the game, however, remains to be seen.

The thing is, people get pneumonia all the time. People do have trouble when they fall ill and take on too much, and Clinton is in the final stretch of campaigning. She's also far from the first political leader to encounter health troubles — let's not forget that President George H. W. Bush once puked at a Japanese state dinner, then fainted. (Embarrassing, health-related hiccups happen to everyone, folks, even those under constant media scrutiny!)

It is OK to get ill. It is even OK to get ill if you're president. We're electing a human not a sun god pharaoh.

If people are leaning towards Clinton because they like her views, political stance, or moral character, it seems doubtful that they'll drop her due to a small bout of pneumonia. If Trump and his supporters really want to win over those on the fence, the way to do it is by attacking Clinton's policies — not her health.