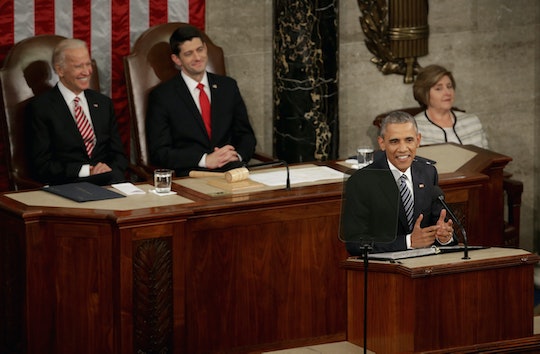 On Tuesday, Jan. 12th, President Obama gave his final State of the Union address to members of Congress and Americans across the country. As promised, Obama kept his final SOTU short and sweet, touching on themes such as the future, change, overcoming fear, social progress, technology, national safety, and job security, among other things. There were also many historical references in Obama's SOTU speech, perhaps because while the president was committed to remaining hopeful, he was also somewhat nostalgic and, perhaps, a little sad that this SOTU address would be his last.

In an effort to highlight the creativity and entrepreneurial spirit of the American people, the president highlighted historical figures that embody the spirit of discovery, research, development and innovation. He touched on the race to the moon and the wonder in which the United States used to look up at the sky and reach for space. Obama spoke about the immigrants who came to the United States and created innovative cities like Boston, Austin, and even Silicon Valley.

The president also brought up past wars, like Vietnam and the war in Iraq, to highlight the need to fight current terror threats in a smarter, more disciplined way.

And that was just the tip of the State of the Union iceberg. While it was clear that the president was hopeful, optimistic and believed in the future of the country he had been serving for close to eight years, he was quick to look at the past and remind the American people of how far we have come, and how capable we are of doing amazing things.

Here's a breakdown of all those amazing people he mentioned: