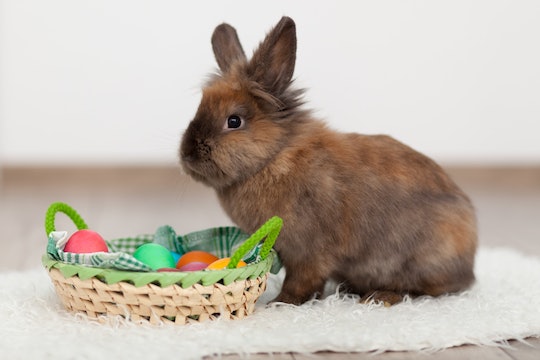 Here's The History Of The Easter Bunny, Which Has Been Around Forever

Despite Easter being a deeply religious Christian holiday, for many people it's all about the bunny. If you played a word-association game and asked someone to give their answer to "Easter", you would very likely hear the word "bunny". Yet, nowhere in the bible is there a mention of a special rabbit in conjunction with Christ's resurrection. So how did this come to be? What is the history of the Easter bunny?

The Easter bunny tradition may have it's roots in Germany, coming to the United States via immigrants in the 1700s. They didn't actually bring the bunnies, but, according to The History Channel they brought "tales of a egg-laying hares called 'Osterhase' or 'Oschter Haws'.” Children constructed nests for the rabbits to put the eggs, which eventually morphed into the present-day tradition of placing chocolate eggs and other goodies in a nest-like basket for the children to enjoy on Easter Sunday. Similar to putting out cookies and milk for Santa, the History Channel also said that some children left carrots for the bunny in case he was tired from all of his basket deliveries.

Easter is a spring holiday and many of it's traditions have a spring theme —the colors, the bunnies, the floral patterns, and the eggs. Though a highly religious holiday, Professor's House explained that Easter has its roots in pagan traditions, meaning it wasn't tied to the traditions involving one God but, instead, involving several gods. The name "Easter" comes from the Saxon goddess of Eastre, who, the Professor's House described, was the goddess of fertility and brought new life or springtime to the world each year.

However, Catholic Online argued that the origin of the Easter bunny is, most likely, Christian-based. The reason why it's more widely believed otherwise is because Jacob Grimm (whose name you may know from Grimm's Fairy Tales) "suggested that the Easter Bunny came from primitive German pagan traditions," the site explained.

From there, Catholic Online said the origin of the Easter bunny might stem from the fertile reputation of rabbits as animals who breed like crazy. The ancient Greeks believed that bunnies could reproduce without having sex and Catholic Online theorized that this belief was later illustrated by how many artists would insert pictures of rabbits into artwork about the Virgin Mary, who also had an immaculate conception when she became pregnant with Jesus. They agreed it's likely the Germans were the ones who brought the concept of the Easter bunny to America.

If the Easter Bunny is one icon, the eggs that he carries is the second. The history of decorating Easter eggs goes back to the 13th century, as reported by the History Channel. Time said that it's possible the decorating of eggs around the Easter celebration time might have come about because eggs were a forbidden food during Lent (the period from Ash Wednesday to Holy Saturday) and people would paint the eggs to celebrate the end of the restrictions that Lent brought. As time went on, the Easter egg roll came into tradition, with President Rutherford B. Hayes introducing it to the White House celebration for the first time in 1878, according to the History Channel. They reported that some find the egg roll a secular tradition, but others have "considered egg rolling symbolic of the stone blocking Jesus’ tomb being rolled away, leading to his resurrection."

Though there are multiple theories as to how the adorable bunny came to be an Easter icon, the next time you see that oversize rabbit posing for pictures with kids at the mall, or hear an adult tell their kids that the Easter bunny is responsible for the overflowing baskets they received Easter morning, you can thank everyone, from the pagans to the Greeks to the Germans, who helped make this tradition a holiday staple.