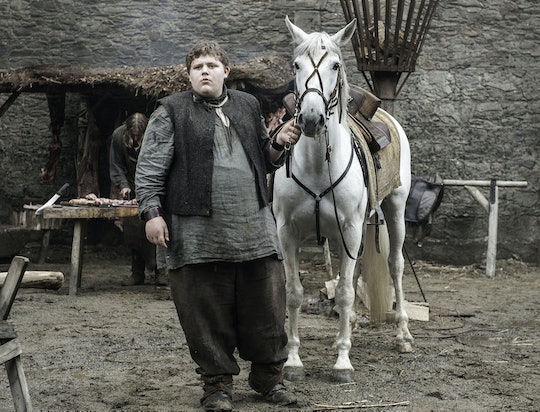 Somehow, Monday wasn't designated an internationally recognized day of mourning for emotionally wrecked Game of Thrones fans, who bid farewell to Hodor in one of the show's most heartbreaking scenes to date. In memoriam "Hold the door" posts flooded Facebook and Twitter (to the much-commented upon confusion of non-fans, whoever those people are), offering empathy and way too soon jokes alike in the form of a plethora of Hodor "Hold the door" memes from Game of Thrones.

On the Season 6 Game of Thrones episode gut-wrenchingly titled "The Door," we learned how Hodor got his name and one-word vocabulary. After Bran accidentally warged into two places at once — both present-day, adult Hodor and past, fully verbal Wyllis — poor Wyllis suffered a collapse and something resembling a seizure, in which he was feeling Hodor's present-day experiences from the future. (Sound confusing? Yeah, that's because Bran is an idiot who majorly screwed up by going into the past without the three-eyed raven to guide him.)

Hodor's present-day experience was, of course, keeping the White Walkers at bay by holding a door out of the cave in which they were hiding, while Meera ran further away with Bran. The White Walkers eventually claw through the door, destroying Hodor, which poor Wyllis can feel as he repeatedly screams "hold the door" in more and more anguish until all he can say is something that sounds like "Hodor."

This is a hugely significant moment in the series, not only because we get a big piece of Hodor's backstory just before he dies, but also because we learn that Hodor's traumatized state is Bran's fault. Hodor's whole life has basically been leading up to the pre-determined fate of sacrificing himself for Bran.

Needless to say, fans found this beloved characters' death completely devastating and were not shy about expressing their feelings in meme form.

Then, of course, there were the inevitable door stopper jokes.

And tons of elevator pranks.

And plenty of brilliant mashup memes.

But honestly, this one really does say it all (and leaves us in the fetal position):