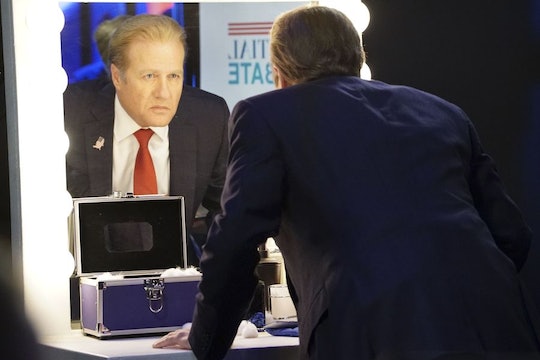 Hollis Doyle Returns To 'Scandal', & Is Just As Trump-Like As Ever

As with the real world of politics, people tend to go in and out of the limelight on Scandal. One such person is Hollis Doyle, who returned to Scandal on Thursday night's episode. Doyle first appeared on Scandal in Season 2. Not only was he involved in the vote rigging scandal that lead to Fitz winning the presidency, he also had people murdered to cover up what he'd done. So, we've known for a bit that he was a pretty terrible person with an off moral compass. Fast forward the current season of the show, Hollis is entering this already intense presidential race — and, if his presidential character familiar it's because Hollis Doyle is essentially the Scandal version of real-life presidential candidate Donald Trump.

Early on Thursday's episode, Doyle met with Mellie, another presidential hopeful, and discussed her campaign. Later, Mellie saw on television that Doyle was announcing his own candidacy and just happen to steal her entire campaign platform to boot. The billionaire Republican and Texas oil tycoon also revealed his Trump-like stance when he said, "If you're some pesky little border crosser, you won't be welcome." Hmm, sounds familiar, doesn't it?

Gregg Henry, who plays Doyle, spoke with The Hollywood Reporter about his return, and said that the Trump imitation took him by surprise. Henry said of the similarity between the real candidate and his character, "When it came up, we immediately thought it he was the perfect guy to mirror and spoof the running of Trump with his billions and inappropriate speech."

Shonda Rhimes herself was also asked about Doyle's return, specifically who would most likely win the election in the Scandal universe given the current political climate in the United States. Rhimes' answer? Doyle. She said, "That sounds terrifying. I’d like to believe that it’s someone like Susan, but I think it’s Hollis Doyle. I think that’s a scary factor, because I don’t think it’s about the issues as much as it is about flash."

We'll have to wait to see if Doyle actually wins the election on Scandal. Because Doyle was involved with the rigging of another election, it wouldn't be below him to use the same tactics again — especially because it's his presidency on the line and could work in his favor. Then again, with Olivia Pope involved, it seems unlikely that Doyle will end up on top.