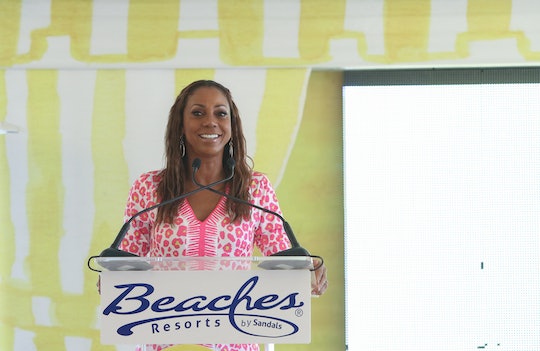 Holly Robinson Peete and her family are no strangers to being in the spotlight. With over three decades of television under her belt, and now a reality show — Meet The Peetes on the Hallmark Channel, Holly Robinson Peete is used to having her hands full. Being an open book has it's perks, but it might leave fans wondering where exactly the actress and mother of four draws the line. The answer is simple: on social media. At Social Media on the Sand in Turks and Caicos, Holly Robinson Peete shared where she struggles with social media as an influencer.

While taking a break from the gorgeous sun and sand the island had to offer us, I had the pleasure of speaking with Peete shortly after she shared her story in an inspiring keynote speech to a room full of female entrepreneurs. Needless to say, Peete was just as open and honest as you might expect, which was just as refreshing as spending a few days at the conference's family friendly all-inclusive host, Beaches.

So, where does Peete tend to draw the line in the sand when it comes to sharing on social media? Not surprisingly, Peete shared that she tends to shy away from getting too political on the internet. "I am very open about, you know, everything, like you said," Peete tells me as we sit across from each other on a tiny couch backstage at Social Media on the Sand. "I kinda struggle a little bit with social injustice and things because I, I'm so compassionate as a mom, and everything is so polarized right now that I try to approach it with a sense of inclusion." To further explain her point, Peete tells me that she doesn't like to "go hard" at people and she isn't on social media to "bully" anyone. In other words, Peete likes to get her point across in a way that doesn't offend anyone or, worse, seems as if she's trying to sell her opinion to the masses. It seems that she's definitely employing the "think before you speak" tactic that many social media users tend to discard, even if their intentions are pure.

"I'm very conscientious about the words that I write when it comes to things I'm very passionate about, like autism," Peete continues to explain, referencing her son, RJ, who is 21 years old and living with autism.

And while we're on the subject, one thing Peete is trying to raise awareness for on social media is how people with autism connect with the police, and vice versa. "More agencies and departments need to have more autism training," Peete shares with an equal mix of concern and passion in her voice. Autism is a topic that Peete has never shied away from, and it's no secret that her transparency and advocating has made a huge impact over the years. Even though her son, RJ, is now an autistic adult who is not only able to drive but also maintains a job working for the Los Angeles Dodgers, Peete hasn't stopped shedding light on the developmental disorder — nor will she ever. Now, Peete is working with an autism advocate she met while filming Hallmark Channel moves in Vancouver, Canada, in hopes of helping police departments in America prioritize training on how to properly interact with someone who has autism.

To make this change, Peete is "proactively" trying to connect with police offers "who are also autism parents." She hopes that by banding the uniformed parents together, they can join forces to fight for special training on how officers can learn to recognize someone who might have autism, as well as how they can help that person even if they aren't able to properly communicate what's wrong to the officers they come in contact with.

One thing is for sure: there is no end in sight for Holly Robinson Peete's life in the spotlight, especially if she can use that light to evoke change for the better where it's desperately needed.