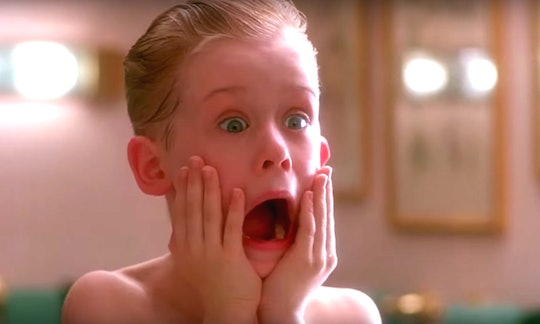 Picture it: a dark figure creeps slowly through an empty hallway, obviously intent upon something unsavory. Suddenly the threatening figure becomes an unwitting victim, caught in violent trap after violent trap: nails sticking up out of steps, broken glass underfoot, flames licking the top of their head. It could easily be a scene straight out of a horror movie, but in actuality, it's a scene from Home Alone. That's right: Home Alone is actually a horror movie and now that the idea is in your head, you won't be able to unsee it.

It's all a matter of tone, because Home Alone is basically outright horrifying on paper. Abandoned by his family over the holidays, a small child is forced to face any number of threats on his own with no way to protect himself. At first one might fear the suspected murderer next door, but there are also the career burglars planning to descend upon the house. However, the zany, broad comedy of Home Alone turns all those details into joke fodder. Ah, the '90s — a simpler time when child abandonment was prime comedic material.

And because the internet is a magical place, some people have already taken it upon themselves to reimagine the family friendly classic as the dark horror film it was clearly meant to be.

YouTuber Bobby Burns recut a trailer for the film back in 2014 that tweaks things just enough to bring attention to the inherent creepiness at play. It emphasizes eight-year-old Kevin McCallister's isolation as he tries desperately to evade the men breaking into his home, even utilizing a slightly warped Christmas-y soundtrack to up the eeriness. But then the tables turn in a classic horror movie twist: the victim turns out to be not nearly as helpless as one expected, wreaking revenge on his aggressors to the point that it's honestly surprising the robbers survived that booby trapped house.

This isn't an unusual plot for a horror film. Home invasion is one of the most tried and true subsets of the horror genres, because there's nothing scarier than your safest space being infiltrated by outside forces who want to do you harm. That type of film is so prolific that for every film that's just about people being tortured by strangers (see: The Strangers, Funny Games), there's also one that twists things so the hero becomes the attacker (Intruders, You're Next).

The recent horror film Better Watch Out was immediately compared to Home Alone when the trailer came out because it takes the film's basic idea to its scariest conclusions. It also has a Christmastime setting and features young protagonists alone in their home, taking action against unexpected guests.

Weirdly, there's also a possibility that Home Alone was actually inspired by a French horror film from 1989 called 3615 Code Père Noël. Written and directed by René Manzor, the film follows a small child named Thomas who is targeted by a murderous vagrant in his secluded house during Christmas. The man kills the servants and Thomas' dog, but he hadn't banked on Thomas' flare for tricks and traps. The small child is able to hold off the murderer for much of the film using his inventions while his mother tries desperately to get to him. Sounds familiar, right?

Manzor thought so too. According to a 1992 article from The New York Times, Manzor contacted Fox to reach a settlement but Fox denied that Home Alone took its inspiration from Manzor's film. "They remade my movie," he said. "I have no choice but to sue them." However, it's not clear that he actually followed through on taking legal action.

If you ever found yourself thinking, "Wait, this is actually extremely messed up," while watching Home Alone, then you're not the only one. It's clear there's a lot of darkness lurking under all that Christmas cheer.