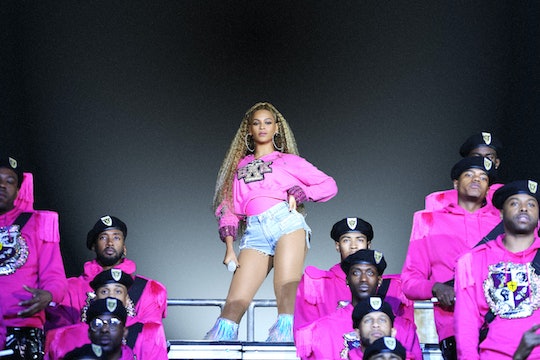 In case you were wondering, Queen Bey still reigns. Just look at Homecoming, the epic documentary she released on Netflix that takes a deep dive into her now iconic Coachella performance. That's "Beychella" to the uninitiated. The world was not ready for the performance, and they weren't ready for how intimate Beyoncé got in the doc about the birth of her twins, who were only months old when Bey changed the musical festival game. Homecoming revealed one of Beyoncé's twins' heartbeats paused while she was pregnant — a horrifying experience for any mom — which was only complicated by the fact that Beyoncé is, well, Beyoncé.

"I had an extremely difficult pregnancy. I had high blood pressure." she confessed in the doc. "I developed toxemia — preeclampsia — and in the womb, one of my babies' heartbeat paused a few times, so I had to get an emergency c-section." She doesn't say if it was Rumi or Sir or reveal much more about her pregnancy or birth except that it was clearly very difficult for her.

Maybe even more difficult was her how hard she pushed her body after having her twins to get back to performance-level physicality. In regards to diet she cut out carbs, sugar, dairy, meat, fish, and alcohol (you know, food). "I'm hungry," she said. My hero!

Indulgent food was the least of her sacrifices. Having just given birth to twins, Beyoncé's body had to not just recover from the trauma of childbirth, but had to be in the kind of shape capable of the (frankly stunning) back-to-back two-hour performances Beyoncé gave the world at Coachella. And in basically no time.

Make no mistake, it was as tough for Beyoncé to handle that while creating a show from the ground up as it would be for you. "You know, a lot of the choreography is about feeling, so it's not as technical. It's your own personality that brings it to life — and that's hard when you don't feel like yourself." She also admitted that it was hard to be away from her kids and she would bring them to rehearsals whenever possible.

I'll probably never feel as tired as Beyoncé did in my life. I can't speak for her (I wouldn't dare) but, I hope she feels like the sacrifice was worth it. "I definitely pushed myself further than I knew I could and I learned a valuable lesson — I will never, never push myself that far again," she said about prepping for the performance. Which means there will probably never be a performance like this ever again.

I don't blame you Bey. Thank you for documenting Beychella on Netflix so we can stream it forevermore.

More Like This
All The Nights Hocus Pocus Airs On TV In October 2022
The Office Halloween Episodes: A Definitive Ranking
Kim Kardashian Stars In Hilarious House Of The Dragon Parody, The Targashians
Lifelong Teacher Dr. Jill Biden Loves Watching Abbott Elementary Too