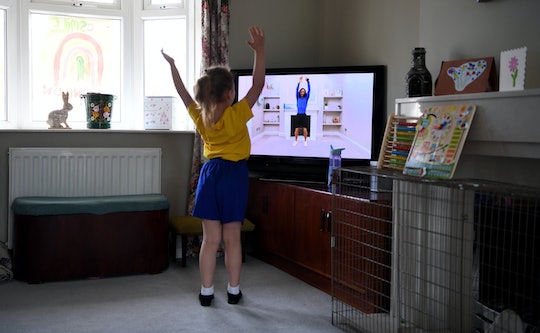 Homeschooling With An IEP? Now You're A Parent, Teacher & Therapist All At Once

School is in session for parents across the world, and for those trying to carry out homeschooling for children with individualized education or learning programs (IEPs), it's a particularly challenging time.

Melissa Gräf, a mother of two in Massachusetts, says the interruption in her 7-year-old’s intensive autism program at his local public school has been insurmountable.

"I feel like we’ve been hung out to dry,” she says. “He is a kid whose entire education is based on physical everything, from who educates him to where his educating is done. So having him virtually learn from me, someone who he doesn’t associate with work or education, at home, which is not where he usually works or learns, isn’t something that is doable.”

Gräf says she tries to facilitate her children’s education as much as she can, but as an essential worker in construction, she is not able to be home all day, another source of stress. “Our income took a hit when my husband was laid off on March 19, so we are thankful [for my job],” she says. “But going to work when I feel like I should be home with the kids is tough. I hate the thought of possibly picking something up at work and bringing it home to my family.”

Tracy Helmer, a stay-at-home mom in Ohio, says that it's not her ability to be home that has made 8-year-old E's distance learning successful, but the exhaustive efforts of her daughter's educators. "They have busted their butts working round the clock to help us continue the learning and routine at home, and it has been a godsend. ... They have been checking in nonstop, letting us know they are here for anything."

But even the school's best efforts fall short of her daughter's IEP. "They modify everything for her and professionally have the knowledge to teach her and get things done in a way that we just can not reproduce." Another challenge has been that E's speech, occupational, and physical therapies all came to a halt when schools closed, marking the first time she has been without these therapies since she was 18 months old.

The lack of routine has been hard on E. "She still asks to go to school and cries terribly and just doesn’t understand," Helmer says. "I’m trying hard to take this day by day and not worry about the future impact of this."

Without that contact, there's not much that could be done to replicate the service at home with a parent.

For the uninitiated, an IEP is a legal document, drawn up by parents and school districts, to outline the accommodations and services a child with a disability is entitled to in order to facilitate learning at a public school, and the emphasis is very much on the "individualized" aspect of this plan. No two IEPs are exactly alike. Some children, for example, may require the aid of a paraprofessional for certain activities, or to have lessons individualized with additional instruction. Others may need daily interventions and therapies that take them from their classroom during regular instruction time. Even a focus break, like a walk outside, may be written into an IEP in some cases. The point is to provide children what they need so they can best engage in the curriculum. Many of these services are hands-on and site specific which, naturally, make distance learning more challenging.

Long-term consequences are on Chrissy Schoen's mind — both of her two children have IEPs and recreating the outlined accommodations at home has been "virtually impossible."

"The services they received from school have effectively stopped," she says. "I'm sad to think that much of that has been undone by this or that the progress made will be negated ... the mods they normally get are related to how they interact in a classroom, so it's pretty irrelevant at home." She says that the staff have to be very hands-on, and the work relies on the relationship between staff and student, based on daily interaction. "Without that contact, there's not much that could be done to replicate the service at home with a parent."

The United States Department of Education's Office for Civil Rights has noted that school closures may interfere with service entitlements for students (without violating the Individuals with Disabilities Education Act). There is some flexibility around figuring out whether a service or accommodation must be provided during school closures as well as how students must be accommodated, the department says. (The Department of Education has not responded to request for comment.)

That flexibility has looked different depending on where you are.

Kristen W., who directs a special education program in Connecticut, says that creating a program that would enable individualized learning took "around the clock" effort to coordinate. "It was harder at first, because I felt like we were architecting a plan that we felt like we could deliver, plus individualize, plus meet the needs of the staff, plus families, plus people who were sick."

But now, she says, expectations for everyone are clearer, and the teachers who work under her are in communication with parents and students to facilitate learning in ways that speak to their individual needs.

"But nothing is the same anymore," she adds.