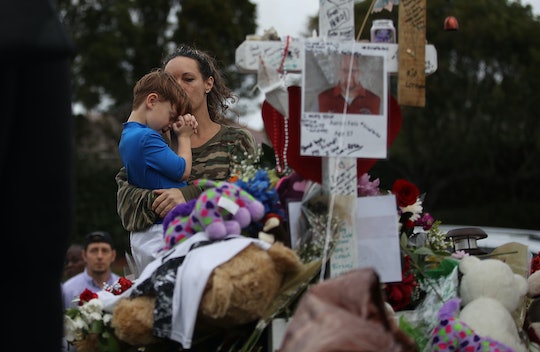 Homeschooling Won't Save Our Kids From Gun Violence

Even after the latest 17 deaths in Florida and subsequent blaze of teen activism, the political will to pass gun legislation seems lacking. Another school shooting feels inevitable, and many parents are wondering out loud if the best way to keep their children safe is to keep them home. A number of these parents are essentially considering homeschooling as an antidote to gun violence.

Several public posts on Facebook have shared, amid the violence, a poem by a 15-year-old lamenting a lack of prayer in public schools, as though the school system is failing us on a moral level, and not the gun lobby and Congressional body. The posts are often accompanied by calls to homeschool.

"The Florida shooting is exactly why I homeschool," writes one mom.

"Seriously, another school shooting?" writes another Facebook poster. "Maybe I should just homeschool my children."

The school shooting epidemic is so, so scary. We as parents desperately want to keep our kids safe, and keeping them away from a place danger can lurk seems an obvious solution. But I believe that in these terrifying, uncertain times, homeschooling isn't the answer to the gun problem.

I trust teachers to do everything they can to protect our kids, and both teachers and students deserve sensible gun control laws.

Watching high-schooler Emma Gonzalez speak after the shooting that took place at Marjory Stoneman Douglas high school in Parkland, Florida, her outrage that she had to stand up and advocate for gun laws when she should have been grieving alongside her classmates was palpable, and we all felt it too. But at the same time, it was apparent how well-prepared Gonzalez was to become a leader in this awful moment, and to push for change. Her class had debated gun rights three times in the past year, she said. Her knowledge of gun laws was, in her own words, "water tight," because she knew it had to be to withstand the inertia of the U.S. gun rights conversation. In other words, she was an example of the positive power of schools, which have organized better than other unwitting target groups did after gun violence visited their worlds.

Removing our children from the classroom takes away many of these specialized learning opportunities, and makes organizing a greater challenge. Classrooms are where our children are educated in much more than math, science, and reading. School is where they learn to socialize and behave appropriately with peers. Where they become acquainted with rules and authority beyond those at home. Where they hopefully encounter crucial racial, ethnic, and religious diversity.

Diversity helps us gain empathy and tolerance for others who are different than us. While diversity can't prevent school shootings, studies show that diversity can help prevent violent extremism, per the UN.

We can't keep our kids safe by keeping them out of school. That's not a solution on a large-scale or long-term basis to the gun problem. And the home isn't safe. Among unintentional shooting deaths of children, 89 percent occur in the home. One in three homes with children have guns in them. A heart-breaking 2,547 children were killed by gunfire in the U.S. in 2014, all per the Children's Hospital of Philadelphia.

I come from a family of teachers, and appreciate the education, care and preparation that goes into the profession. Most teachers would lay down their lives for their students if called to do so. We've seen heartbreaking examples of teachers and coaches protecting their students at any cost in many school shootings, including the recent tragedy in Florida. I trust teachers to do everything they can to protect our kids, and both teachers and students deserve sensible gun control laws.

Learning to work closely with classmates who have different beliefs and backgrounds can yield lifelong benefits and help ward off that toxic recipe.

In 2011-12, 3 percent of American children aged 5-17 were homeschooled, according to the Department of Education, and 83 percent of homeschoolers were white (5 percent were black and 7 percent were Hispanic). One of the most frequently given reasons for parents choosing homeschooling is the opportunity to provide religious or moral instruction, according to a report from the Department of Education, or "dissatisfaction with the school environment."

However, one of the advantages of public and even private school is children being exposed to diverse beliefs, and not being limited to what their family and social circle believes. Intolerance is frequently a cornerstone of violent shootings and other attacks on the innocent — and a history of domestic violence or misogynistic beliefs bears out through many shootings. Learning to work closely with classmates who have different beliefs and backgrounds can yield lifelong benefits and help ward off that toxic recipe.

In addition, school provides valuable socialization that is as much a part of education as the academics. School is where children often learn social norms and make friends that can support them through difficult times and stave off alienation. Coming together at these times is what will protect us; not retreating to our homes.

On a recent morning before school, my 6-year-old casually mentioned that a classmate said he was going to bring his dad's gun to school. We alerted the school immediately, and my son was interviewed by the principal. The school followed up with the family of the child in question, and it turned out to be a squirt gun the boy was talking about. Better safe than sorry.

The prospect of school shootings is terrifying, but shootings and other attacks of violence can and do occur everywhere at anytime, even when our children are with us. The sad truth is, we alone can't keep our children safe, despite our desperate intentions.

That task is up to stricter gun control laws.

Homeschooling is great when it's chosen because it's the right choice for a family, and there are sufficient funding, resources, and support in place to do it well. However, homeschooling is not the answer to the school shooting problem. School is too important. Too specialized. Too diverse.

The good news is, the next generations are in great hands. Hands like those who taught Emma Gonzalez, and prepared her to speak out so powerfully for better gun laws, and the hands of Gonzalez and her classmates.

By and large, these are the people we're exposing our kids to by sending them to school. Passionate advocates for a better and safer country, committed to doing what we have to do to get there. In that sense, schools might be our best hope.