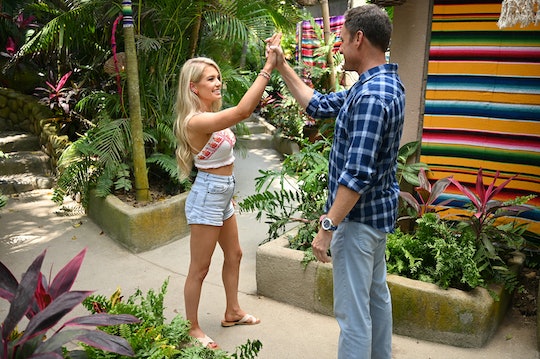 Homophobic Twitter Is Already Coming For Demi On 'Bachelor In Paradise'

When the first full-length Bachelor in Paradise trailer aired, several news outlets were quick to name Demi "the first queer Bachelor contestant," which any seasoned fan will recognize as Jaimi King erasure. But despite her claim to fame as The Bachelor's first openly bisexual contestant, Jaimi failed to make any same-sex connections in Paradise, which is part of what sets Demi apart. Homophobic tweets about Demi from The Bachelor predictably began rolling in after the trailer showed her making out with a mystery blonde woman, proudly declaring, "I don't care who sees this." Cut to Demi in some fantastically bisexual eyewear, gushing, "I know that I love this girl. I'm just so happy that I found her, and I can definitely picture being with her for the rest of my life."

But in addition to finding queer bliss, she's also expertly handling her homophobic trolls on Twitter, proving she has the advocacy skills necessary to take on the challenge. It all began with a truly vile DM, which Demi screenshot and posted with the caption, "Twitter do your thing." The message referenced Demi's coming out tweet, which she posted after the trailer aired, writing: "Spoiler alert: I'm a queer queen."

The troll in question opened her DM with, "'Queer queen'? More like f*ggot queen #Embarrassing," and only got more hateful from there. The user's account has since been deleted, but the DM went on to compare "being gay" to "seeing a black bird and a robin having sex." Several more slurs were peppered throughout and, in closing, she wrote, "Girl don't get me wrong I loved you when you were in Colton's season but now your a f*ggot and I DONT support f*ggots." Cool. Very chill.

After initially claiming her account was hacked, the salon where the Twitter user worked reached out to Demi via DM to let her know that the employee in question had been fired. Because are you ready for the mother of all karmic plot twists? The salon owner had not one but two daughters in same-sex relationships. "We love those daughters and treat them no differently than our other four children. I apologize deeply for any harm this behavior may have caused you or anyone else," the salon owner wrote.

Demi screenshot and posted the message, captioning the photo, "Salon 7 made it right. We STAN them for taking action!!"

While this epic saga had a satisfying ending, this user was far from the last troll Demi encountered.

Plenty of Bachelor fans were happy to write to Demi publicly on Twitter voicing their disapproval of her choices. But each time, Demi dominated the exchange, from calmly pointing out that "I have nothing against gay people but I don't want it shoved down my throat" is still homophobia, to explaining why it's important to integrate queer Bachelor/Bachelorette contestants as part of the main franchise instead of segregating them on their own show. (Though, as the groundbreaking all-queer season of MTV's Are You The One? demonstrates, both formats clearly have their merits.)

The point is, Demi may not have been a lifelong queer activist before she joined The Bachelor, but she's obviously committed to standing up for her community as thoughtfully as possible through her newfound visibility now. And it doesn't hurt that she's great with a clapback.