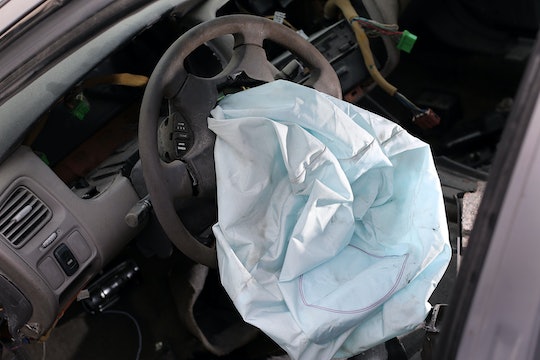 Drivers take note: Two separate airbag safety issues have led Honda, Acura, and Toyota to recall millions of cars. Honda (which also owns Acura) and Toyota both announced recalls related to their vehicles' airbags on Tuesday. While the airbag issues behind each company's recall differed, both could pose serious safety hazards for car occupants.

Honda announced plans to recall some 2.4 million Honda and Acura models in the United States on Tuesday, citing an issue not related to its previous Takata airbag inflator recalls. In this recall, Honda claimed airbags inflators that were manufactured with non-azide propellant (NADI) have been found to allow air and moisture to leak into the inflators, causing degradation of the propellant.

"If a recalled NADI inflator-equipped airbag with degraded propellant deploys during a crash, it may deploy too slowly or, in very rare cases, too forcefully, rupturing and throwing metal pieces of the inflator toward vehicle occupants," Honda said in its recall notice. "Either scenario could contribute to occupant injuries."

Also on Tuesday, Toyota announced it was recalling some 2.9 million cars in the United States due to an electric control unit that could lead to incomplete or nondeployment of airbags and seat belt pretensioners in underride crashes. "Airbag non-deployment and/or lack of seat belt pretensioner operation can increase the risk or severity of injury in a crash," the manufacturer said in a recall notice.

Honda has said that owners of recalled vehicles will begin to be notified by mail in mid-March. Concerned owners can also check their vehicle's recall status using their car's Vehicle Identification Number (VIN) at www.recalls.honda.com (for Honda owners) and www.recalls.acura.com (for Acura owners) or by calling (888) 234-2138. Any repairs required as a result of a safety recall can be obtained free of charge at authorized Acura or Honda dealers, the company noted on their respective recall websites.

Owners of affected Toyota vehicles will be notified by the manufacturer in mid-March and remedy repairs will be done at no cost to owners, Toyota said in its recall notice. Owners can also check to see if a safety recall has been issued for their vehicle by searching their VIN or license plate at Toyota.com/recall.

Romper reached out to Honda and Toyota for comment, but at the time of this writing had not received a response from either manufacturer.

Car owners can also check for any other potential airbag or safety recall issued against their vehicle by inputting their VIN in to the recall search feature available free of charge by the National Highway Traffic Safety Administration (NHTSA)'s recall website.

More Like This
13 Is "Too Early" For Kids To Be On Social Media, Surgeon General Cautions
Harrison Ford Is A Proud Dad Of 5 Kids Who Are More Than 30 Years Apart
Adele’s Grammy-Nominated Album Features A Beautiful Song Written For Her Son Angelo
Brandi Carlile Is “Finally Cool” To Her Two Adorable Daughters
What Parents Are Talking About — Delivered Straight To Your Inbox