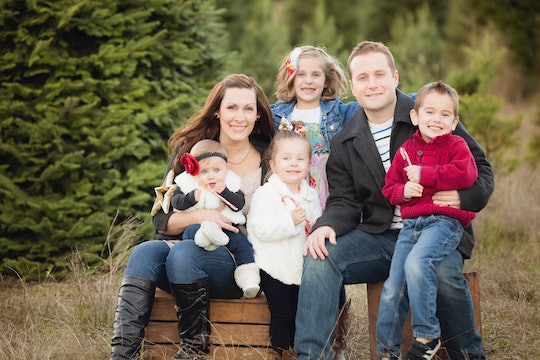 Dear person whose mailing address I miraculously still have,

Happy holidays! It's time to take stock of our lives by measuring the distance we've come this year (bonus points if you added a human to the pile), the number of honor students we can claim on our car's bumper, and our ability to coordinate outfits (it took approximately 47 trips to Target) in our family's annual Christmas Letter.

Before I regale you with the goings on of the MacIntosh family, I need to note that if you're one of my mother's friends from church, I hope you read the whole letter, because it's written pretty much only for your benefit, i.e., so my mom can humblebrag about her kids and grandkids during the homily.

Our biggest collective news is that back in April we moved! The new neighbors are welcoming and lovely and have not yet once complained about our multiple HoA violations, because they get that sometimes bringing the garbage cans in from the curb is just not one's top priority. This is definitely our forever home, in that it will take forever for us to pay it off. (We're really hoping for some sort of zombie apocalypse that will render all our current financial systems moot).

Speaking of zombies, I'm going on a year of no sleep whatsoever now that our sweet little Stella is 1. She she no longer looks like a very tiny old bald man and is, according to numerous sources, actually very cute now. (We've always thought she was adorable but, like, we get it.) Her milestones are probably not all that interesting to other people — you all have been sitting up and rolling over on your own for a while now — but every time she does something new, which feels like a daily occurrence, the only thing keeping me from squeezing into my old cheerleading uniform and busting out the pom poms is the fact that I can't find them.

Logan, now 3, is an energetic, spirited toddler who can draw a perfect circle... mostly. His circles look like potatoes, but who doesn't like potatoes? They're delicious. This was a big year for our little man. In June he was potty trained. In September, we put him back in Pull-Ups because we were tired of throwing away poop-filled "big boy underwear." Fortunately his new preschool is cool with it. Yes, he started preschool this fall! Refer to the small grid on the back of this card for lesser moments from the Singsong Academy that paint us in a good light.

Isadora, now 8, is doing great in school and also in the 109 different after-school activities she's enrolled in this semester. We've always told her she could do anything she set her mind to and I guess she took that to heart because she's trying everything. She says a "VSCO girl." Initially, I was unclear on what that is, but after months of observation I've figured out that it's a generation of girls unknowingly doing impressions of their mothers circa 1997. It's actually sort of great: I'm loving the flashbacks. The other day she asked for a Nirvana t-shirt without realizing Nirvana was a band and after I stopped laughing I sat her down and forced her to listen to "Smells Like Teen Spirit" until she appreciated it. She's a good kid. And, as far as I know she hasn't done anything ill-advised on social media yet, so I'm calling that a win.

When I asked my beloved husband Matt what he'd like me to include about him in this letter he shrugged. (Question: is it "invisible labor" if you're literally producing something like a letter?) I'd go into more detail about his job but, I gotta be honest: after 11 years of marriage I'm still not super clear on what it is he does. Something with numbers? Honestly he could be pulling a Breaking Bad even as we speak and I'd have no idea.

In May, I celebrated nine years at Todd & Whitmeyer, where I was promoted to senior vice president! To celebrate, I bought a pair of designer heels to symbolize my inner #GirlBoss and very quickly remembered why I stopped wearing heels after I had kids. So now they live more or less exclusively in my closet where I gaze at them in proud admiration, knowing that, if I chose to, I could rock them.

But, honestly — honestly — things in our family are nevertheless pretty great. It's madness, yes, but we wear it well. From all of us to all of you,

More Like This
101 Advent Calendar Activities, From Books To Read To Cookies To Bake
13 Brilliant Gifts For Kids Obsessed With Music — Especially Singing Very Loudly
20 Of The Best Christmas Movies For Kids
60 Bits Of Christmas Trivia To Delight Your Friends & Family