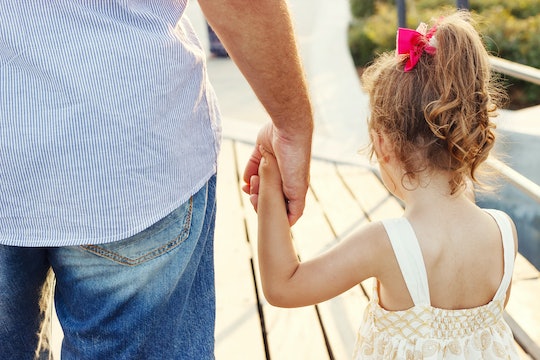 A mom posted a photo to Facebook last week along with a caption that celebrated a dad taking his daughter on a "date." The woman's post went viral because so many thought it was "so sweet." Along with some pictures of her daughter, she wrote,

My husband decided once a month he will take our little girl out on a "date" where she gets all dressed up and gets taken out for cake and ice cream. Tonight was there [sic] first night doing it. He helped her pick out a dress for her to wear, got a little purse ready for her, held the door open for her, and made her feel like a princess. She loved it and was so happy when she got home. She will always know how she deserves to be treated because her dad sets such a high example.

While I don't fault the woman who posted this, I am pretty uncomfortable with the overall idea of "daddy-daughter dates." On LifeWay’s “3 Benefits of Father-Daughter Date Nights,” a father asks, on a "date" with his seventh-grade daughter, “How have you felt during our date tonight? I don’t want you to expect anything less from a boy you’re dating.” The site notes that he “opened doors, pulled out chairs, asked her questions and offered kind words about her external and internal beauty.”

Nor are these two examples outliers. The internet is full of Daddy-Daughter Date nights, most hosted by a church or a community center. One includes “a candlelight dinner, dancing, photo, and a goodie bag.” It costs $45 “a couple.” Another says girls must be four years old to attend and features a photo of a girl clutched to a man’s chest. Still another offers to let men “celebrate Valentine’s Day with one of the most important little ladies in your life with dancing, entertainment, and dinner.”

These aren’t sweet. They aren’t cute. They’re creepy, and they seek to enforce patriarchal notions of femininity.

These little girls, who are taken out on dates by their fathers, are taught that men should do everything for them. Men open the door. Men pull out the chair. Men buy everything. Men even pick out their dresses and purses, in Fladager’s daughter’s case. It’s incumbent on the man to “ask questions” and draw her out. And it’s his job to validate her inner and outer beauty.

This is 2017. And newsflash, women don’t need men to do things for them. We don’t need some big, bad patriarchal figure to hold the door or compliment our inner beauty. We deserve men who are equal partners, who share life’s journey with us, and who treat us as equals. Daddy-daughter dates include an implicit power dynamic, and it’s not in favor of the girl. They aren’t empowering. They’re teaching girls to accept a domineering masculine figure in their lives. You don’t see Mother-Son Dates, and that’s because boys don’t need to be socialized into a female-dominated society.

It primes my sons to grow up to expect girls who are submissive and passive — not equal partners. These ideas force them into the gendered notions of the patriarchy, where men make the choices and women obey. It's only a sidestep from rape culture, and it's my job, first and foremost, to bring my sons up not to rape.

Moreover, it’s just… creepy. “Daddy-Daughter Date” sounds like a porno. You can’t escape the incest-inspired overtones of these dances and "dates." Research from the New York City Alliance Against Sexual Assault indicates that 10 million Americans have been the victims of incest, with 11 percent of rape victims specifically victimized by their father. One study published by Marshall University found that out of 1,521 individuals, 19 were victims of father-daughter incest. Incest has been cited as the most common of all child abuse by the New York Alliance Against Sexual Assault, and 43 percent of children who are abused are victimized by family members. Incest happens. It’s almost commonplace. To have such dances in this environment seems almost cruel — and possibly irresponsible, enabling predators to play out a Lolita-type fetish right under the eyes of God and the community.

I don't have daughters — only sons. But these attitudes harm them, too. It primes my sons to grow up to expect girls who are submissive and passive — not equal partners. These ideas force them into the gendered notions of the patriarchy, where men make the choices and women obey. It's only a sidestep from rape culture, and it's my job, first and foremost, to bring my sons up not to rape.

Father-daughter dates serve no one but the patriarchy. They’re sickeningly close to the phenomenon of “purity balls,” in which girls dress up in ball gowns, dance, and have dinner with their fathers, and then receive a ring from him when they promise to remain “pure” until marriage. It posits that the girl belongs to her father until she’s married, at which point her ownership passes to her husband. Daddy-daughter dates skirt perilously close to this assumption. At the very least, Daddy becomes a stand-in for a sexual partner, one who makes all the decisions, possibly down to the purse.

Daddy-daughter dates don’t help girls learn what to expect from men. They teach them that men are superior, and they need to obey them; they try to mold girls into submissive, passive women. They’re one more tool of the patriarchy, one more way to hold girls back, but this time with a creepy sexual edge. If I had a daughter, I wouldn’t send her on dates with my husband. They might have one-on-one time — and to be fair, some online lists of daddy-daughter date ideas include things like hiking — but taking your daughter out to a candlelight dinner and dancing crosses the line between cute and incest. It’s weird. It’s patriarchal. And I don’t know how mainstream America can’t see that.

More Like This
From Captions To Gifts, These Are All The Kindergarten Graduation Ideas You Need
Fun Ways To Celebrate National School Nurse Day
Mindy Kaling’s Daughter Is A Total “Narc” With Her Little Brother
Ashley Graham On The “Fun, Organized Chaos” Of Raising Twins