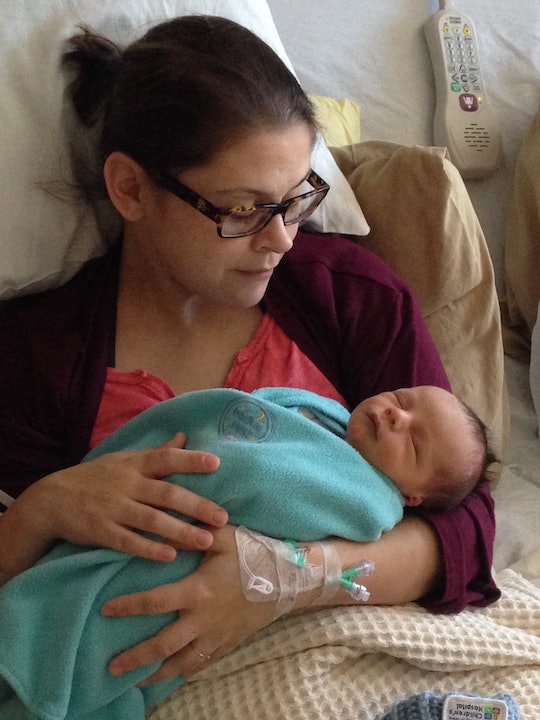 TBH, I Couldn't Bond With My Baby At The Hospital

They say you’re pregnant for 9 months, but anyone with a calculator can prove that it’s 10 — 10 long months with someone residing not beside you, but inside of you. 10 months of someone telling you they will soon be here, letting you prepare for their arrival while they prepare for theirs as well. But I don’t think anything can prepare you for the actual hospital stay.

I didn’t give birth in any natural, traditional way. My baby was pulled out of me, after an induction that just wouldn’t work. The doctors tried oral induction meds, then a Foley balloon (basically a balloon that was inserted into my cervix to encourage) and then Pitocin (a form of oxytocin that causes contractions). Eventually, they gave up and called for an emergency c-section.

The surgeon sliced me open so quickly that there’s a jagged turn in the supposed-to-be straight incision line. My husband was sent in, dressed head-to-toe in a bodysuit that the hospital team gave him in order to comply with surgical standards. By the time he walked through the doors, he had nearly missed the main event. It happened so fast, in fact, that I questioned whether the baby crying out was mine, or someone else’s in the room.

It was odd that it happened so fast, because that moment came after DAYS of "labor" – three days, as a matter of fact. We’d gotten used to just being in the hospital without any baby. And then, suddenly, with a whoosh, he was here. Just like that. To be perfectly honest, I didn't know how to deal with it, so I had trouble bonding with him at the hospital.

They handed our baby to my husband, who showed him to me. My husband dangled our baby’s little body near my left ear, muttering something about his "being here," and then our baby was whisked away to the nursery, as I was in some distress post-surgery. My anesthesia had completely worn off on one side of my body, and the doctors took me to my own room so that they could assess why. My new baby was gone as quickly as he arrived, and I was left alone. In the recovery room, I floated in and out of awareness.

I didn't have any mind-altering drugs during labor; it was very important to me that I be alert and present when I first saw my child. I clearly recall the reaction I had when he was placed in front of my eyes, and it was a simple, quiet: “Hmm.”

I lay there, thinking about my body and how vulnerable it was. I'd grown a person, and then I'd been cut open.

Eight hours passed, before I was with my now-baby again. Eight hours. In those initial eight hours, I was supposed to be breastfeeding him, cuddling him skin-to-skin, and getting to know him. But I was still alone in the recovery room.

No one had offered to bring my baby to me, and I suppose I hadn't known if I could even ask. I lay there, thinking about my body and how vulnerable it was. I'd grown a person, and then I'd been cut open. All of my thoughts were centered on me. For eight hours. I often wonder if these eight hours were the reason I didn’t bond easily with him then, or if they didn’t have anything to do with it. I will never know.

But beyond that, I didn’t bond the way I thought I would. Our bond wasn't immediate and serendipitous. I simply quietly observed him, this person now in the world, who depended entirely on me.

By the time we drove home, I began taking more pictures. I held his tiny, tiny hand in the backseat of the car. Talking about his behaviors, his ways. Talking about him as if he were a person, instead of an idea or a thing.But it took months before I longed for him when I was away. It took many months before he felt completely essential to my life. Sometimes I wonder if it would have taken as long if I'd had those initial eight hours with him.

Having a baby is like an arranged marriage. There’s going to be a contract involving the two of you, and the odds are, you will grow to love each other. The odds are overwhelmingly in favor of this. And although everyone tries to tell you that this love is instantaneous, you are allowed to take your time on the way to falling in love. Because rest assured, it will find you.