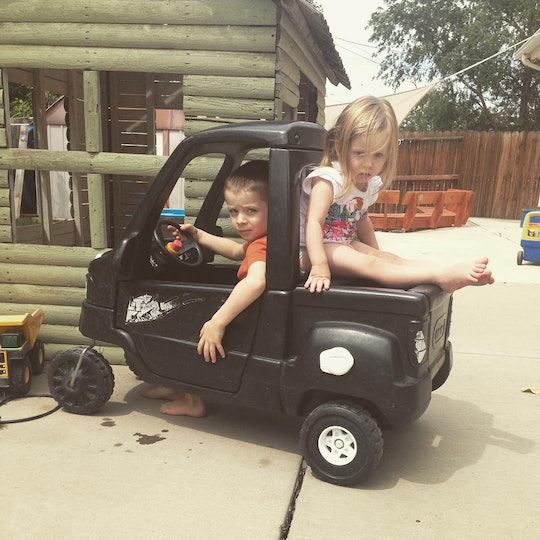 Honestly, I Don't Care If My Kids Are Book Smart

I have never been on pins and needles, searching for signs that my kids are geniuses or child prodigies (though I did, briefly, go through a phase of trying to coerce my son into becoming a junior masterchef, because how nice would it be to have your kid cook you gourmet meals every night, right?). I never have the urge to humblebrag about my kids’ intelligence on social media because I am far more likely to share funny videos or the epic messes they've created. I spend very little time wringing my hands over my kids’ IQ’s (none, actually), because honestly, I don’t care if my kids are smart.

I care about what my three child are currently (and grow up to be) passionate about. I want each of them to follow their interests and discover what makes them tick. Whether or not they are smart is such a small part of who they are to me that it doesn't register on the grand scale of things I hope they'll do or be or say or have. In my opinion, their intelligence isn’t interesting to me — but they are. The things they create, the passions they pursue, these are the things that will define them so much more than how smart they are on paper. I wonder far more about whether my son’s love of building will turn him into an architect than what he will score on his SAT’s someday.

Don’t get me wrong, I care if my children are educated. And that's where things differ: I don't care if my children aren't book smart in the way we've all traditionally been thought to admire. I don't care how high they score on their SATs or whether or not they graduate first in their class or 50. But I do care that my children understand the world and themselves and other people. I do care they they are informed. I'm not planning on raising kids who are willfully ignorant or don’t graduate high school, sending them off into the world with caveman-like knowledge all because I don't care about the word "smart." I want them to gain mastery over the subjects they are taught in school. I want them to understand complex issues and grapple with difficult questions. However, I don’t think being book smart is necessary to their ability to become well-rounded and well-educated adults. I also don't think earning an A in English literature in fourth grade is a prerequisite to getting there.

How “smart” they are doesn’t have to be the biggest factor in the equation of their success. In fact, I don’t want it to be something they factor in at all.

Getting an education has nothing to do with whether or not you are smart. Sure, life might be easier if you’re smart, but it’s not a requirement. Dedication, hard work, perseverance — these are things that can be cultivated to help my kids succeed in academic endeavors. How “smart” they are doesn’t have to be the biggest factor in the equation of their success. In fact, I don’t want it to be something they factor in at all.

Intelligence shouldn’t be the crux of their self-pride anymore than natural athletic ability or aesthetic features. It’s hereditary. It isn’t earned. So you’re damn right that I don’t care about how smart they are. That would be like caring about them having hazel eyes or long legs or being able to hold their breath underwater for more than two minutes or any other abilities or attributes that are completely out of their control. If they are naturally smart, great. If they aren’t? Also great, because it simply means they'll be a little more hardworking, and that’s not such a bad quality to have.

The qualities my two sons and my daughter work on building and shaping are far more important to me than the qualities they naturally have. I want them to be hardworking. I want them to be kind. I want them to be empathetic. I want them to be unafraid of voicing their opinions. I want them to be tough. I want them to put effort into the things that matter to them, whether it’s becoming a gymnast or an engineer or photographer or whatever else they find that lights up their souls. I understand my children are already at an advantage because of the color of their skin. I understand that people may often presume they are smarter than they very well actually are. Yet I still want to teach them that they don't have to live and die by the grade on a paper in high school or the final report from their year in third grade. I want them to know there is more out there for them — and that I'm going to do everything I can to help them find it.

If my kids don’t define themselves by their intelligence, they won’t be paralyzed with fear of failure. And I won't ever shame them for not caring about their smarts. They can make mistakes and learn from them and move on without worrying that their identity as “smart” kids will crumble. I want them to create their own identities, not base them off some arbitrary trait they inherited, even if, especially if, that trait is natural intelligence. Being smart will not make them the best version themselves — the values they choose to cultivate will.