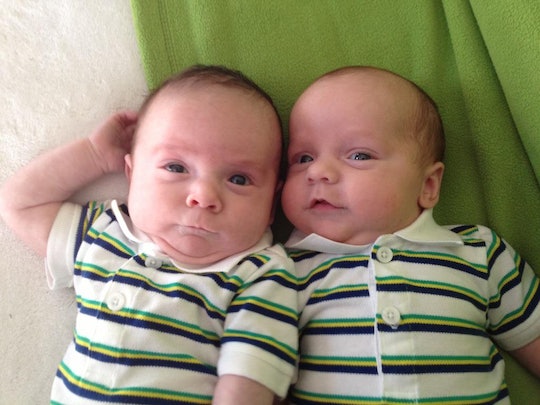 Honestly, I Wish We Hadn't Circumcised Our Sons

When I found out I was carrying not one but two tiny penises inside me, I immediately deferred all genital-related decisions to my partner. I assumed that he, having a pants sausage of his own, would know better than I about these things. I grew up with a younger sister, no brothers, and a step-dad who didn't come on the scene until I was in fifth grade. The only thing I knew about penises was what I learned in ninth grade health class and from my own research between the sheets.

So when my partner said he wanted our sons to be circumcised like him, I had reservations about putting our boys through a medical procedure that, from my point of view, didn't seem to be all that necessary. Circumcision wasn't a part of either of our religious beliefs and frankly, I didn't want our sons to be in any pain. Plus, I didn't know how they'd feel about being circumcised once they were old enough to understand what had been done to them, and I was more than a little paranoid about the doctor sneezing mid-procedure and well, you know. But as I didn't have a penis and my partner did, I let him make the final call. It was one more parenting decision knocked off the list.

When I asked my husband why he thought we should circumcise, he said he liked the idea of the boys "looking like he did." He also thought that many of their peers would also be circumcised and this would spare them potential gym class locker room embarrassment. Plus, he told me circumcision can reduce the spread of AIDS and STIs, facts backed up by research in the journal mBiosphere. As much as I didn’t want to think about my precious babies doing the dirty one day, I liked the idea of protecting them from getting sick, and what my husband said about kids wanting to fit in with each other and their dad made sense to me at the time.

Part of the reason I joined team circumcision is because I’m lazy. I read that without a circumcision, a boy would have to be taught to retract and clean the smegma from under the hood of his foreskin so an infection doesn’t brew. And until he's old enough to handle his junk on his own, that job falls on the parents' shoulders, and I didn’t like the idea of having one more thing to add to the already long list of baby hygiene tasks. And, truth time: I've never seen an uncircumcised penis. I didn’t like the idea of signing on for something I didn’t know.

Three years later, I wish I hadn’t been so quick to agree to get my boys snipped.

I asked the kids’ pediatrician if we could wait to perform the procedure until they were older, because there was a part of me that felt bad doing something that was mainly cosmetic to an infant without their consent, but the doctor said circumcisions are at a higher risk of complications and can be more painful the older a boy is, so it was pretty much now or never. Honestly, I have zero reservations about piercing a baby girl’s ears and would have done so as soon as cleared by a doctor had I had a daughter, so I reasoned that although a bit more involved, a circumcision was pretty similar to getting a girl’s ears pierced in that they’re both mainly cosmetic. So I agreed to have them circumcised and I signed the foreskin removal forms a few days before the boys were due to come home from the NICU.

On the day of the circumcision, I was in the room (but not directly watching) when Remy had his done, and true to the doctor’s word, he didn’t seem bothered much by it. He let out a single short cry that ended as soon as the nurse offered him a hit of sugar water. And I was told Lolo’s procedure went even more smoothly. That should have been the end of it — mom and family live happy, foreskin-free lives — yet, three years later, I wish I hadn’t been so quick to agree to get my boys snipped.

First, there was the recovery. As I was packing to finally bust Remy loose from his baby jail in the NICU, a young nurse mentioned I should make sure to "pull his shaft skin away from the wound" whenever I changed his diaper so it wouldn’t form an adhesion. She also told me to enjoy wearing my peacoat that winter for the last time, because as a mom of twins, running around after them would mean I’d never be cold enough to pull on a jacket again. As she walked away an older nurse came up to me and said, “Don’t listen to her, she doesn’t know what she’s talking about. Don’t touch the wound, just cover it in antibacterial cream and let it heal.”

I trusted the older nurse because I assumed she had more experience, but it turns out the younger nurse was right on both counts. Sure enough, Remy’s circumcision started to form adhesions, which happens when the shaft of the penis starts to adhere to the glands, or head, of the penis, which it's not supposed to do. And to this day, I can leave the house in a sweater in the middle of a blizzard and still be sweating.

I let my partner talk me into circumcision because I didn’t want to think about my son’s penises and yet here I was, obsessing over them.

His poor little penis got so red and angry looking that I dragged him, his brother, and their 347-pound car seats to the doctor, which not an easy feat when you’re a mom still recovering from a c-section. The doctor told me I could gently start trying to ease the sticking skin back from the head of the penis and that over time, as his penis grew, any remaining adhesions would self-correct. But I was worried that they wouldn’t, so for the next month I spent the bulk of the hour after bath time examining his junk more closely than I'd ever any looked at any of my past lovers, trying to delicately coax his shaft skin away from the head of his penis. I let my partner talk me into circumcision because I didn’t want to think about my son’s penises and yet here I was, obsessing over them.

Lolo didn’t have any complications from his procedure, but I still wish I hadn’t agreed to getting him snipped either. I didn’t know what to expect following the circumcisions, but seeing dried blood and angry wounds in my babies’ diapers certainly wasn't on the list. I told my husband I didn’t know it would be like this. Even though the boys didn’t seem to be in agony, the circumcision sites looked raw and painful and I was furious with myself for putting my kids through this essentially for aesthetic purposes. I told my partner he owned me something nice to make up for it and he came home with cake and vowed to change all the diapers so I wouldn’t have to look at the wounds. That helped, but I still felt bad. My husband understood where I was coming from and comforted me, but he reminded me that at our boys wouldn't remember the procedure or healing process once they were adults. And he was still adamant that we did the right thing. He thought they would be grateful making them look like him and like the majority of their peers. I, on the other hand, handed him a pillow and told him to sleep on the couch.

I thought getting my sons circumcised would help them fit in, but I realized now how little sense that makes.

One of my partner’s biggest selling points in favor of circumcision was so that our boys would "look like him," but frankly, their dad’s not strutting around them naked all that often. They might get a glimpse now and then when he’s coming in or out of the shower, but that thing’s like a snake: it retreats to the safety of the bush when it senses it’s being watched. The only other penis they have to compare their own to is each other's, and even though they’re both circumcised, they look nothing alike below the belt. One of the boys' circumcision is looser than his brother's, a fact they both sometimes point out during baths (not that they understand why). I thought getting my sons circumcised would help them fit in, but I realized now how little sense that makes. After all, I’ve seen my share of adult male penises, and being circumcised doesn’t mean they all look the same.

If I had known then what I know now, I would've left their bodies alone.

It seems weird to me now that we thrust this idea of adult conformity on male infants and not females. Not all females have the same sized breasts (especially at birth). And even though some women are cruel to each other for having a chest that’s too big or too small, or if their breasts aren’t the same size, the overall message we send to women and young girls is to celebrate their bodies as is. At the very least, we allow them to make the decision to pursue cosmetic surgery once they’re old enough to make an informed choice. We don’t give baby girls hormone injections or implants to influence the shape of their chests so that they can all look like one another in the high school locker room. So why do we do this to boys?

If I wanted to try and save face, I could comfort myself with the fact that my boys still benefit from being circumcised because their genitals have less of a risk for infections of STIs. But we’re fortunate enough to live in a modern world with access to clean water, health care, and sex education. Circumcised or not, my sons will grow up knowing how to wash themselves and how to wear a condom during sexual activity.

Let me be clear: I’m not anti-circumcision. I still understand why people chose to do it and it’s a common enough procedure that I don’t anticipate my kids coming to me in anger one day demanding to know where their missing foreskins are. I think, because they're circumcised, they'll be in the majority among their peers. I don’t judge anyone who chooses to circumcise and I won’t beat myself up for the choices I made when my boys were infants because they made sense to me at the time. But I do wish I had given the matter a bit more thought before I had agreed to have my sons circumcised. If I had known then what I know now, I would've left their bodies alone.

More Like This
How A Recall Of Contaminated Formula Made The Formula Shortage Crisis So Much Worse
Can You Help Your Baby’s Hair Grow?
Here’s What You Need To Know About That Viral 1960s Baby Formula “Recipe”
Gerber's New Spokesbaby Isa Has The Biggest Brown Eyes & Was Born With A Limb Difference