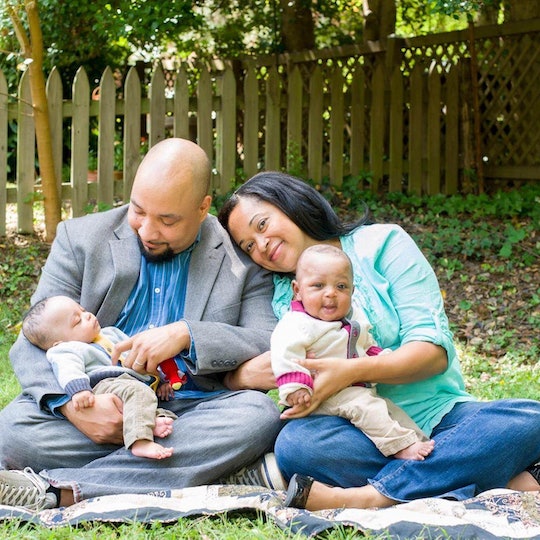 Honestly, I'm Exhausted By How America Has Failed My Family

Days ago, I woke up to the news of Alton Sterling's murder. The rage, the indignation, the resignation, the fury — it was already in full swing as I scrolled through my Twitter feed. I saw a video link. Wondering what went on and not knowing the full extent of what I was about to see, I clicked and watched. I was alone in my home, my dog whining in the background, my work blinking back at me. I had other things to do, but I couldn't look away. I watched, like thousands of others, as an officer lowered his gun closer to a man on the ground — so close I wondered whether Sterling could feel the heat of the barrel on his back. Then I heard the shots, the sounds of crying — my own, the woman in the video, the sobs of all those who watched, of all black people, of all of us still carrying the weight of all the other dead black bodies in our souls: Trayvon Martin, Michael Brown, Tamir Rice. There are too many bodies now to name them all. I covered my face and closed my eyes, giving in to the familiar exhaustion that's been lingering in my bones for a while now. As Roxane Gay wrote in her NY Times essay, "I felt so very tired." And I do.

Honestly, I can't tell you when the fatigue set in. Was it the murder of Philando Castile, less than 24 hours after Alton Sterling? Was it when the weight of 49 dead bodies killed in an Orlando nightclub felt like they would crush my soul? My family and I were leaving an amusement park full of thousands of people that day. I got behind the wheel of my car, checked my phone, and read that a gunman had shot up a gay nightclub, killing black and Latinx people who just wanted to be free. I let the car air conditioning cool my skin, my kids babbled in the backseat, life went on for me, for lucky me, despite the load of sadness. But I don't even remember the drive home.

I am tired of feeling lucky.

Maybe it was the bombing on June 28 at an Istanbul airport. Or the terrorist attack in Bangladesh on July 2. Or the day of the deadliest ISIS attack in recent Baghdad history on July 4. Maybe it was when I watched all of these events roll over one another in rapid succession, maybe that's when I became so exhausted. I consumed and digested all that hate, death, and fear at once — while I cooked dinner for my family, potty-trained my sons, worked on my writing, tried to diet, tried to forget, tried not to fall asleep at 9 p.m. from the exhaustion of living in this world, of merely existing. The emotional burdens combined with my everyday physical ones have become too much for me to carry anymore.

I wondered when I would stop being tired, just so damn tired of this. It is one of the only times ever in my life where I have envied white people.

But each day for those who remain goes on as if the day before never happened. I woke up to yet another video, another black man dead, murdered at the hands of someone who swore to protect and serve him — and this time I did not watch. I read about Philando Castile as my sons ate their breakfast. In that moment I wanted to curl in a ball, forget about everything. Oh, how simple that would be. To ignore the hate and death, to live in a bubble where people aren't shot enjoying their lives, or working, where icons don't die untimely deaths, or men — men who look like your husband, men who look like grown-up versions of your sons — aren't murdered for obeying the law. I wondered when I would stop being tired, just so damn tired of this. It is one of the only times ever in my life where I have envied white people.

At work, I locked myself in a bathroom stall and watched Diamond Reynolds give a live interview in front of the Minnesota governor's mansion. She spoke about Castile, her version of what happened during the traffic stop, and her ordeal in the hours since his shooting. And just as I did when I saw Sandra Bland assaulted for being herself and speaking her mind, just as I did when I witnessed my friend Dr. Ersula Ore thrown across a police car for demanding respect — I saw myself, I saw my family in this woman's pain. She could be me. Castile could be my husband. Her daughter could be my sons.

I realized just how lucky we are at any given moment of any given day to be alive. This luck also feels burdensome. I am tired of feeling lucky. Tired of being afraid for the day my luck wears out. Tired of being afraid that it could be my husband or my sons one day. That it could be me. Will I live a day where I don't feel lucky not to be the name inside the newest trending "Justice For" hashtag? I want to feel safe enough where luck has nothing to do with whether I live or die. I left work early, my head pounded like fists beating at the ground.

I am in a constant state of weariness. Reynolds' daughter witnessed a man being shot to death at the age of 4, a year older than my sons. She will have to live her life forever reliving that death over and over again. And no, I am not supposing to know what she will think. I am speaking the truth of what it is to be a black person in this country. These shootings will not stop, violence, death, and hate, they won't all of a sudden stop. And because she lives in this world full of humans who suck at humanizing, she'll be forced to confront her memories of a loved one's brutal murder over and over again — be it from a terrorist attack, another fatal cop shooting, or some other violent incident. And she will grow tired, just like so many of the rest of us have.

I don't know how to shake this feeling, this deep resignation and sadness that's taken over my spirit and body. There are so many burdens — the burdens of a parent, of a wife, of a black woman, of an American citizen — that who knows when this feeling started. This exhaustion feels like it's been with me so long, maybe it was here before I was even born. But, although I am so tired, so heavy from this world, I cannot rest. I will not rest. And just as Gay wrote,

It is horrifying, and even though I feel so resigned, so hopeless, so out of words in the face of such brutal injustice, I take some small comfort in still being able to be horrified and brought to tears.

It is this comfort that I hope to always carry with me as I face the burdens of another day. I am exhausted, but I will do what so many others have been robbed of: I will live.