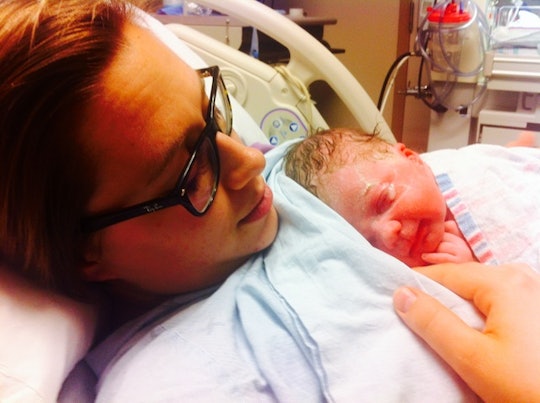 Honestly, I'm Really Happy I Got The Drugs During Delivery

I brought up the option of a drug-free delivery to my doctor in the first trimester of my pregnancy. "I've been doing some research," I told my OB. "If possible, I'd like to go drug-free." He smiled and told me that we still had a lot of time to think about that. He answered my questions and I told him that I would remain open to the possibilities. But, in my heart, I knew that it was important I do it myself and have a "natural" delivery. I'd made up my mind: I didn't want the drugs during delivery. But the thing about pregnancy is that it is a perfect metaphor for life. Not just because you're, you know, making a life. Pregnancy is the perfect metaphor for life because no matter how much I prepared, no matter how sure I was, no matter what I thought I knew, the only thing I could really control about my pregnancy was how I chose to react to it.

So, when pregnancy — and life — decided to make its own plans for me, I had to adapt. In the end, I was given drugs — Oxytocin — and an epidural during my labor. And honestly, I'm happy I got the drugs during labor, because it helped clarify what was most important thing about labor actually was: delivering my baby.

I was born via c-section and nothing bad happened to me and my mother is not somehow less of a mom because I didn't burst through her vagina like a football team on game night.

I had gotten it into my head, through assumptions I'd made before I was ever pregnant or even considered becoming pregnant, that I wouldn't and shouldn't need drugs during labor. I reasoned that: a) women have been having babies for millennia without assistance, so why couldn't I?; b) childbirth is basically the primary functional purpose of my vagina and uterus, so modern drugs shouldn't be necessary; and, c) it felt weird to me that I wasn't allowed to take things like Advil or cough syrup during pregnancy, but once it came time to push it would be acceptable for me to be pumped full of narcotics. Plus, I'd heard a talk radio program years before that said the number of c-sections in North America was on the rise and I somehow got it into my head that drugs would lead to a c-section and that a c-section was definitely bad. Forget the fact that I was born via c-section and nothing bad happened to me and my mother is not somehow less of a mom because I didn't burst through her vagina like a football team on game night.

We'd reached a point where, if her heart rate continued to be so unstable, they would have to go in and take her out.

My pregnancy, as it turned out, had other plans for my unborn daughter and I, because at my 28-week ultrasound, we found out that our daughter would be born with four congenital birth defects: complete Agenesis of the Corpus Callosum, colpocephaly, neuronal migration disorder, and septo-optic dysplasia. Her diagnosis not only filled our hearts with fear for her future health and development, but it also put limitations on the kind of delivery I could have. There would be absolutely no option for me to have a guaranteed drug-free birth at home or at a birthing center, as she would need a team of doctors present to assess her upon delivery. And then 11 weeks later, at a bi-weekly ultrasound in the High-Risk Pregnancy Unit of our hospital, we were told that our daughter's heart rate had dropped dangerously low. Doctors wanted to induce rather than risk it happening again and I watched my dreams of a drug-free labor crumble.

In my head, I had created this moment when I would go into labor: I'd be woken up in the middle of the night by labor pains and I'd reach over and gently shake my partner awake and say, "It's time." He'd jump out of bed and I'd slowly and calmly get dressed. I'd be his rock while he swam in a sea of excitement and nerves — even though, throughout our entire relationship, he has never been the sea and I have never been the rock; but a pregnant girl can dream, can't she? We would get to the hospital and I'd walk the halls waiting for baby to come; he'd feed me ice chips and rub my back and hold my hand through the particularly hard contractions. And even though, it hurt like hell, I'd eventually push our daughter into this world, all by myself, because I was her mother and that's what I should do.

Somewhere along the way I'd convinced myself that an induced labor, a pain-managed labor, was "less" of a labor and that it would make me less of a mother or woman to have one.

But my reality was starkly different. Induction wasn't necessary, in the end. I was already 3 centimeters dilated. But oxytocin was used to speed up the labor process. Still I refused any type of drug to help with the pain, even though I was in a lot of it. And so was my partner, as he watched me suffer through every contraction, made more frequent and longer, and therefore more painful because of the oxytocin. My daughter's heart rate continued to drop though. And eventually, after many offers of drugs, my doctors gave me an ultimatum. We'd reached a point where, if her heart rate continued to be so unstable, they would have to go in and take her out. If I didn't get an epidural now, I would have to be put under general anesthetic for the delivery and hospital policy would not allow my partner in the delivery room for this procedure. Neither of us liked the idea of not being physically and mentally present for our daughter's birth.

So, I capitulated and sat for the dreaded needle in my back. The first epidural didn't work well. Somehow, I ended up with the entire right side of my body numbed. My mother actually thought I'd had a stroke because the right side of my face, my eyes, and my mouth drooped. So they had to let the epidural leave my system and start again. The second time there were no problems and when they checked my dilation, I was 10 centimeters and told to start pushing. I didn't realize it until much later because as I was pushing all I could think about was meeting my baby, but pushing pain-free, because the oxytocin had helped my labor along, made things abundantly clear: Maybe it was because I was scared about my daughter's diagnosis so I focused on something I thought I could control, but somewhere along the way I'd convinced myself that an induced labor, a pain-managed labor, was "less" of a labor and that it would make me less of a mother or woman to have one. Obviously, I was wrong. Pushing my baby out with or without drugs didn't make me a better or worse mom, but it did make me a less-stressed patient, and that mattered to me and my partner a lot.

My doctors didn't want to use drugs to help with my labor because there is some conspiracy on their part to drug up every new mom whether it be with laughing gas or an epidural. They wanted me to take the drugs because the drugs meant that I'd be more comfortable, and if I was more comfortable, there was a better chance of my baby being more comfortable, which meant that there was one less thing for them to worry about. I'm not saying my doctors were lazy or heartless for not wanting to worry about me — but I am saying that for something as important as my child's birth, I wanted my doctors to have the easiest job possible.

Even though my delivery went nothing like I'd hoped it would, even though I was given drugs to speed up my labor, and an epidural, 15 months later I am still happy — with all of it.

And having the drugs not only made the doctors' jobs easier, it made my partner's job easier too. An epidural wasn't just a kindness to myself, my psyche, and my body, it was a kindness to my partner. If you have the kind of birth partner I had, they would do anything in their power to take away your pain and discomfort. They would rub your back, hold your hand, walk with you, bring you water, drive home and bring you the two books that you thought you'd have the time or inclination to read during labor or after. I'm not saying get an epidural or take the drugs to make someone else happy, but I am saying if you do get an epidural or take other pain medication, your birth partner will probably appreciate it.

How I gave birth wasn't important. What was important was that I gave birth to an as-healthy-as-possible baby, as safely as possible.

I think I forgot, from my North American hospital bed, with every life-saving option available at my fingertips that even today — even in North America — women still die in childbirth. The World Health Organization estimates that in 2015, 303,000 women died from complications due to pregnancy or childbirth. Childbirth, while the most natural thing in life, is still one of the most dangerous. Even though my delivery went nothing like I'd hoped it would, even though I was given drugs to speed up my labor, and an epidural, 15 months later I am still happy — with all of it. Because it helped me realize that how I gave birth wasn't important. What was important was that I gave birth to an as-healthy-as-possible baby, as safely as possible.

The drugs helped me to leave my expectations at the door. They reminded me that my doctors were on my side, that my partner was in this, too, and that the thing that made me a mother wasn't how long I labored, how much it hurt, or whether my daughter came into this world from an incision in my abdomen or from my vagina. The thing that made me a mother was how much I already loved her.