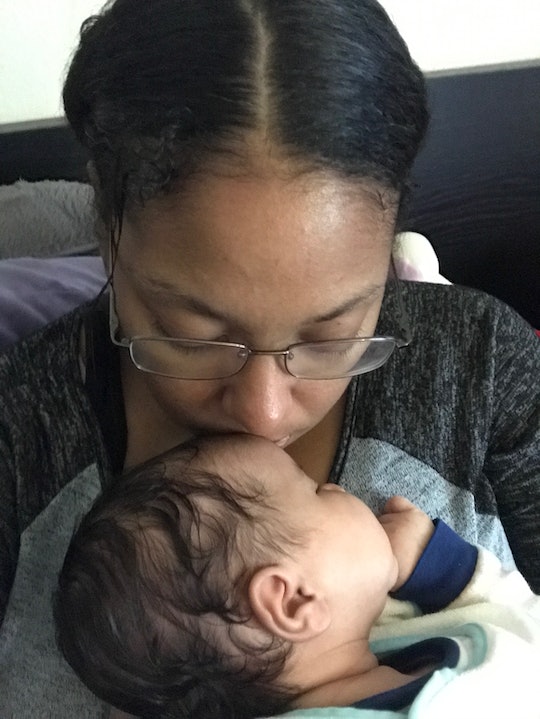 I’m So Glad I Gave Up Breastfeeding

When I had my fourth, and probably last, child, I decided that I would feed him from the breast and breast alone. I assumed it would be easy. I have 7-year-old twins, and even though it was incredibly challenging to nurse them both at the same time, I'd successfully breastfed them a few years before. So I figured it would be easy to nurse one tiny little baby this time around. But I was wrong. Breastfeeding my son turned out to be one of the most frustrating times of my life, and I was so glad when I finally decided to stop.

When my son Kai was first born, I had no problems whatsoever breastfeeding him. Right after my c-section, he easily latched on in the recovery room. I was thrilled. While in the hospital, however, things got challenging. It was difficult trying to prop him up on a pillow while recovering from major surgery, and my milk hadn't yet come in. The nurses reassured me that my milk would come in any day and to keep giving him the breast, because at least he was getting colostrum. But he was crying so much, and I was suffering from so much pain and lack of sleep, that on the last day at the hospital, I caved and gave him a bottle of formula.

The nurses told me that if I started giving my son formula, that's all he'd want, which made me feel terrible about my decision. Still, I was determined to keep breastfeeding.

Once we got home, feeding Kai was a little easier. I was able to get comfortable in my king-sized bed and lie him next to me, so when he was ready to feed again, he was right there. There were nights when he’d fall asleep on the breastfeeding pillow and I would start to doze off myself.

Then my milk came in, and everything changed. I was so engorged that I was in excruciating pain, and I couldn't express any milk. I tried warm compresses, showering, and using my breast pump. I'd feed Kai for however long he wanted to feed, then take him off and try to pump. But I had so much trouble expressing that he would fall asleep halfway through a feeding, only to wake up crying sometime later, as if he’d had nothing at all.

"I breastfed twins," I kept thinking to myself. "Why can't I breastfeed this one baby?"

I was tired, sore, and sad. I didn't understand why, if I had so much milk to the point that I was engorged, I couldn't express any milk, even though I was pumping constantly. "I breastfed twins," I kept thinking to myself. "Why can't I breastfeed this one baby?"

Then the pain of engorgement turned into nipple pain. My nipples started to crack and bleed from the endless feeding and pumping. I tried coconut oil, which helped a little bit, but if I put on too much on, my nipples would get too soft and Kai had trouble latching on. It was a catch-22. I using nipple shields, but after a while, he got frustrated with those and they would slip, spilling whatever milk was trapped inside. So instead of letting him cry and cry from not being able to get enough milk, I started making him bottles. First, I would give him whatever I pumped out, but at times that wasn’t enough. I'd put him on the breast, only for him to cry, then I'd give him a bottle of formula.

My friend, who’d successfully breastfed her children, tried to encourage me to keep breastfeeding, but she was understanding and sympathetic to my struggles. Another close friend of mine had only given her children formula and told me not to feel bad if I had to give Kai formula. I decided to do a mixture of both. I would put him on the breast some of the time, and then just supplement with formula.

As anyone who has breastfed knows, breasts produce through supply and demand: the more you feed, the more you produce. Because I wasn’t giving Kai the breast around the clock, I wasn’t producing enough, and my breast pump was not getting out as much as he would during a feeding.

Ultimately, I realized that I couldn't let my decision to stop breastfeeding be influenced by other people. I needed to make this decision based on what was best for my baby and for myself.

I started to think this was all an exercise in futility, and I came close to giving up. But I was afraid of what people would say about me giving up breastfeeding so soon. I'd heard about women being shamed on social media for mentioning that they no longer breastfed, or that they never tried it to begin with. I was ashamed of my inability to successfully breastfeed and terrified of what other moms would think of me. But ultimately, I realized that I couldn't let my decision to stop breastfeeding be influenced by other people. I needed to make this decision based on what was best for my baby and for myself.

After discussing it with my husband, I decided to start exclusively formula-feeding him when he was about 2 months old. I did not go into the decision lightly. He was 2 months old. My husband reassured me when I cried and told him I felt as if I was failing our baby, and he told me that Kai would be OK either way. If Kai wasn't getting fed enough, I had to do what was best for him and best for my own mental health.

After a while, my nipples healed. My husband was able to take over some of the feedings, and I was happy and well-rested. I was even able to help my older daughters with their homework because I wasn’t exhausted all the time. Kai is now 3 months old and sleeping through the night.

Honestly, I really wish I could have continued to breastfeed my son, because those first few weeks of breastfeeding weren’t all bad. There were times when he looked up at me and held my fingers while I was feeding him that absolutely broke my heart, and I was proud of being able to feed him from my breast. But after all I went through, I’m glad I stopped. I would never suggest to another woman if she should breastfeed or not. I believe we all need to do what is right for us.