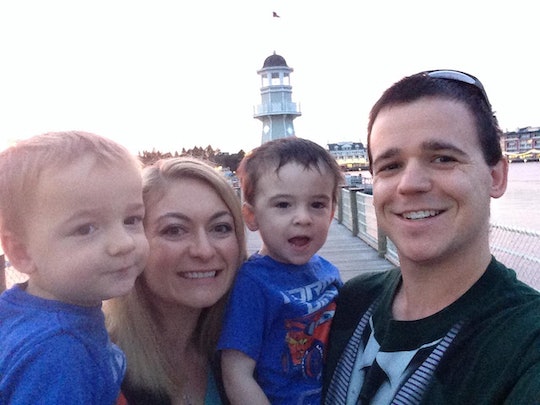 Honestly, My Husband Is A Better Parent Than Me

Not to get all Kanye on everyone, but I know I'm a good mom. When I read books I give all the characters different voices, I bake cookies from scratch that taste good 96 percent of the time, and years of sorority crafting mean my kids will slay at the science fair when the time comes. But despite my formidable mommy skills, deep down I know my partner is the better parent.

My husband are alike in many ways. We're both athletic with an addiction to frosting. We love to travel and don't care much for organized sports outside of the Olympics. We speak fluent Harry Potter (yes, the books and the movies). There are times when we have entire conversations with each other without ever saying a single word, especially when the person in front of us in the Target checkout line doesn't know how to use the chip reader (push it all the way in and don't take it out until it says to, is it really that hard?) properly and holds us hostage as a result. But even though we are exactly same in so many ways, when it comes to parenting, he's clearly much better at it than I am.

My husband is naturally more patient than I am. We're both guilty of turning into The Hulk, especially when it's close to bedtime, but he manages to stay in the Mary Poppins zone far longer than I can. I tell myself it only seems like I yell more than he does because I'm the one that's home all day dealing with the potty spills and fights over who gets the blue cup versus the red one while he's at work, but deep down, I know I'm lying. Even on the weekends when we're both pulling full-time parent duty, he's cool as a cucumber when the kids are literally running circles around him. He just stands there, waiting for them to get the energy out of their systems. Meanwhile, I'm alternating between threatening to take their teddy bears if they don't stop moving so fast and flat-out begging them to calm down.

Whereas I'm primarily concerned with keeping them safe, he has a better awareness of the fact that they won't be small forever and therefore need to be prepared for life as independent adults.

He swears less than I do. Of the two of us, I've always had the more colorful vocabulary, but I thought that once I became a mom I'd leave my potty mouth behind. Turns out, my constant worrying about the kids means I swear even more as a mom than I did before I had kids. I try not to, but for me, when I'm at the edge of my rope, a rousing F-bomb can get me through till nap time. But not my partner. When he stubs his toe on a toy truck, he's likely to scream, "Fudge!" instead of the four-letter alternative.

He plays with them more. I love my kids, really I do, but I'm just not that interested in play cars or building blocks. As much as we're raising our kids to be open in regard to gender stereotypes, they naturally gravitate to their "boy" toys more than their play kitchen or their dolls. I love them enough to play with them for their sake, but my husband genuinely enjoys the superhero Lego sets and action figures they have and is happy to get down on the floor with them for hours. But me? I bail after 20 minutes and head to the couch where I split my attention between my family and my phone.

I worry so much about them getting hurt that I sometimes hold them back from experiencing fun things. My husband, on the other hand, doesn't.

He's much less anxious than I am. I worry about everything, which comes in handy when we're out for the day and we need a backup to the backup outfit, because odds are good that I've packed one, as well as multiple plastic bags to hold the soiled clothes. My overthinking is great because I nearly always have snacks and drinks on hand for the kids, but it's bad because I worry so much about them getting hurt that I sometimes hold them back from experiencing fun things. My husband, on the other hand, doesn't. He'll push the boys higher than me on the swing, let them try dunking their head underwater in the pool when I won't, and he'll happily hand them their own toothbrushes and tell them to have at it without fretting that they'll wind up with cavities, like I do. Whereas I'm primarily concerned with keeping them safe, he has a better awareness of the fact that they won't be small forever and therefore need to be prepared for life as independent adults.

If parenting was a sport, I'd take silver to his gold. But I'm surprisingly OK with not being the parenting champion in our partnership. I don't get mad at my partner for being better at this parenting gig than I am because I want our kids to have a good childhood, and I'm happy that when I'm not being my best self, he can do right by them for the both of us. And he's never made me feel badly about my parenting follies. Even though he admits he takes the parenting crown between the two of us, he's also always quick to point out that regardless of who's better at parenting, it's my lap the kids fight over, not his, and I'm the one who gets called in for extra kisses and hugs every night.

Even though he's got it over me on paper, I know my kids love me fiercely. Flaws and all, I'm the one they fight over when getting out of the tub. They grab my hand to pull me towards the playground and tell me to watch them, even though they know I'm not going to let them climb up the slide. And when I lose my temper and yell at them, they look solemnly into my eyes as I apologize and squeeze me so hard that I feel it in both my neck and in my heart. I learned pretty quickly that it doesn't matter who the better parent is. For me, parenting isn't about being perfect, it's about doing my best. I may make more mistakes than my partner, but as long as I show my kids that I'm trying and admit it when I'm wrong, I know they'll still love me, and that matters more to me than the title of top parent.