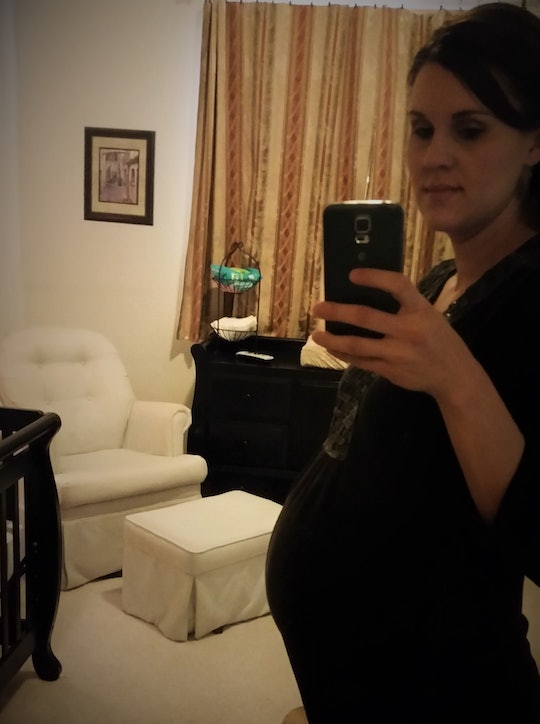 Parenting is nothing like I'd expected. Before becoming a mom, the picture I had anticipated on what parenting would be like was laughable compared to the real thing. I imagined sipping a latte on a cool spring day while watching my children frolic and play near our white-picket fence. I realize now that while that sounds great, it more closely resembles a Folger's commercial than it does reality. Real parenting is much closer to some sort of circus juggling act. There is obscene amounts of laundry, lots of tantrums, and even more toys scattered about than there are stars in the sky. Yes, motherhood is wonderful and I am so very grateful for my role, but that's not what your brain is telling you when you're tired, stressed, not feeling well, and trying to parent while also pregnant.

Parenting while pregnant almost broke me, it was that hard. I felt like my energy had completely depleted and just getting out of bed every day was a challenge. My heart wanted to play with my kids, shop for my new baby, and organize everything, but my body wanted to go back to bed for the rest of the pregnancy. I was constantly nauseous, hyper-hormonal, and utterly exhausted. When I first found out I was pregnant with my third child, I was so excited. We already had two sons so my husband and I were thrilled to be adding another to our family. My oldest was going into kindergarten and my youngest was 3, and we both knew it would be our last pregnancy so I vowed to try to enjoy every minute. That is, until I realized how impossible that would be.

About six weeks into my pregnancy I remembered how insanely exhausting pregnancy is. Fatigue hit me like a ton of bricks. All I wanted to do was sleep, but since I had other kids to take to school and of course keep alive, laying in bed all day was simply not an option. Parenting while pregnant proved to be much more difficult than I remembered. I started to envy first-time moms and wondered if I enjoyed my pregnancy the first time around as much as I should have.

To be honest, my first trimester of pregnancy made parenting so hard. I was constantly tired, agitated, and ready to gag at the first smell of something unpleasing in a one-mile radius. If I smelled someone smoking, I wanted to barf. I realized quickly how difficult it was to prepare meals, clean bathrooms, and grocery shop when everything made me want to vomit. I remembered just how impossible it was to be around other people. I was desperate to make it to the second trimester, where I told myself I'd have more energy and parenting wouldn't be so hard. I told myself if I could just hang in there, things would get easier. But then summer hit.

I felt like I was just surviving my days instead of enjoying them.

I dropped my son off and picked him up from school everyday in 110-degree heat. I changed my clothes and even showered twice a day some days, because my "pregnancy glow" was actually just lots and lots of sweat. I often fell asleep on the couch while my husband tried to keep our boys occupied. But when it was time for bedtime, all bets were off. Over the years our bedtime began to closely resemble animals trying to escape from the zoo. For some reason, trying to get two crazy boys to settle down and sleep proved to be one of the most difficult tasks for me, especially because I was pregnant and my body was exhausted. The only problem was that when I finally did lay down to sleep, I struggled to get comfortable, got up six times a night to pee, and picked up the new habit of snoring. My husband somehow thought it was cute that I snored louder than our dogs, but I didn't not feel cute in the least.

And just when I thought the end was in sight, things got even harder and my third trimester hit me like a tornado. My hormones and huge belly made parenting damn near impossible. Disciplining my sons became super difficult, and I dreaded the thought of getting up, let alone putting a child in timeout. Dinner was something I absolutely loved to eat but definitely didn't want to cook. My waddle was getting harder and harder to master and it stopped being cute around 36-weeks pregnant. Even though I knew I'd miss being pregnant eventually, I was just so sick and tired of being sick and tired.

I felt like I was just surviving my days instead of enjoying them. Don't get me wrong, I had plenty of wonderful moments with my boys during my last pregnancy — moments when they'd talk sweetly to my growing belly, when my husband and I would lay together on a blanket in the grass while our boys played at the park that I'll forever treasure — but pregnancy was kicking my butt and overall felt too difficult to bear. I was still a good mother to my boys, but I felt guilty that my sons had to be so patient while I rested instead of chased after them. They were ready for me to come back to play and run around with them, and so was I. The lack of energy was killing me. I felt like a zombie.

Making lunches, driving kids to school, and picking up the house sounds so simple and usually it was not that difficult to keep up on, but being nine-months pregnant made all of that sound like climbing Mount Everest. I was also extremely emotional. My kids wondered why I was crying at the Hallmark commercial and my poor husband couldn't say a thing without me over-analyzing his every thought. The hormones were fierce and I felt like they were starting to become part of my personality. My resting b*tch face was starting to feel permanent.

Believe it or not, caring for three children (including a newborn) was so much easier for me than parenting two while pregnant. Once my energy came back, I felt ready to take on my new role as a mother of three. I felt more like myself than I had during my entire pregnancy.

Thankfully, after I'd given birth to my third baby, I realized that pregnancy, while exhausting, is so very worth it in the end. Parenting while pregnant almost destroyed me, but once I held my precious new baby, all the difficulties seemed to fade away. Not only did I feel a huge sense of gratitude for my children, I felt a burst of new energy that I hadn't felt in months. Almost immediately, the fatigue, nausea, back aches, leg cramps, and exhaustion floated away. My energy was back and made such a huge difference in my parenting. I was relieved to feel like myself again.

Believe it or not, caring for three children (including a newborn) was so much easier for me than parenting two while pregnant. Once my energy came back, I felt ready to take on my new role as a mother of three. I felt more like myself than I had during my entire pregnancy. Even now as I sit here surrounded by laundry ready to put away, chores that haven't been done yet, homework, and three crazy kids with endless amounts of energy to care for, I still think it's easier than pregnancy.