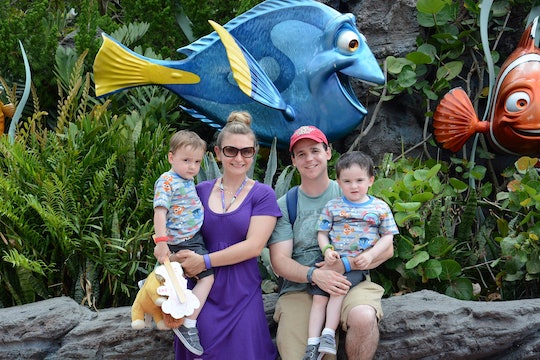 I knew having twins would forever change my body, and I was even prepared for my sex life to take a back seat to baby raising, at least for a little while. But none of the brutally honest talks I had while pregnant with my friends who were moms or anything I read online even hinted that sex after baby could be downright painful. Now, I'm not a nymphomaniac, but like any other couple who likes each other, sex is a big part of my marriage. And hating sex after baby, well... that was something I was totally not expecting. At all.

When I was pregnant I wasn't overly concerned with the outward changes that might happen my body like stretch marks or whether or not pregnancy would turn my boobs in to sad, droopy basset-hound ears, because I knew my partner loved me regardless of how my body looked. But I was worried about the wreckage pushing twins out would cause to my strawberry pop tart, if you will. I'd heard stories from friends about how their vaginas were never the same after a vaginal delivery and while I was happy to become a mom, I wasn't thrilled by the idea of irreparably harming myself.

Rather than just tell him this wasn't working for me, I pretended like nothing was wrong.

As it turns out, I had an emergency c-section, which was scary and left me literally scarred for life, but I consoled myself with the thought that at least my glory hole would still, in fact, be glorious. However, the first time my partner and I did the deed post-delivery, it felt like fire, and not in the you're-getting-me-so-hot kind of way. I figured it was because we'd only waited five out of the six weeks my doctor recommended before hopping in the sack together. So my partner got me an ice pack and we kept our hands to ourselves for another week.

But when we tried again, the sex really, really hurt. We tried lube, and that made things feel a little less like my partner was wearing a sandpaper condom, but not much. Rather than just tell him this wasn't working for me, I pretended like nothing was wrong. And instead of bumping up my annual OB appointment, which was a couple months away, to get myself some answers, I did nothing. I decided to wait until my scheduled appointment because I was embarrassed to look like a bad mom who was thinking about sex instead of her newborn babies. (See, like I said, stupid.)

The other giant mistake I made was not telling my partner I was still experiencing pain. Instead of being up front and telling him the truth — that even though the foreplay was better than ever, the actual having sex with him act felt like I was mating with a chili pepper — I bit my lip and bared it. I liked everything we did up to the actual sex part, and I craved the closeness I felt from being physical together. I was worried that by telling him I wasn't into the sex anymore we'd lose the closeness as well. Plus, I wondered if maybe the months of abstinence while I was pregnant and on bed rest were to blame for the pain I now felt. Maybe I just had to keep doing it to blow the cobwebs out of there or something.

With tears rolling down my cheeks I finally told him the truth: Sex had been hurting me since the boys were born, but I didn't want to say anything because I desperately didn't want us to fall into the cliché of parents who don't have sex.

After about six weeks of acting like I was enjoying myself during sex when in fact, I was not, I came clean. We were just about to have sex when I winced and told my partner that having sex was very uncomfortable, and sometimes downright painful. With tears rolling down my cheeks I finally told him the truth: Sex had been hurting me since the boys were born, but I didn't want to say anything because I desperately didn't want us to fall into the cliché of parents who don't have sex.

My partner was furious, but not for the reasons I ever expected. He was upset I kept something this important from him and mad I'd ever think he wouldn't want to do what was best for me and my body. He told me he loved me no matter what, even if we never had sex again. He was horrified by the thought that I was in pain all that time and he was unaware. And he made me promise to call my OB the next day to move up my appointment and held me until I fell asleep. I, on the other hand, was so relieved to finally have it all out in the open.

I went to visit my OB the next day. Even though I was glad my partner now knew what was going on, I was still a little embarrassed to be talking about sex so soon after the birth of my kids, but if my doctor thought it was unusual, he certainty didn't let it show. He did an exam to make sure that there was nothing wrong physically and told me that, with all the postpartum pregnancy hormones I was experiencing, vaginal dryness can be just as much of an issue as women feeling loose after having a baby. Because my case seemed to be a bit extreme, he prescribed me medication in case there was a sneaky bacterial infection at work, and introduced me to an over-the-counter moisturizing gel I could use every couple days to try and ease the irritation.

Even with the gel making things feel more like it used to down below, it was still weeks before I felt up to trying to have sex again, and even then it didn't feel fantastic, but it didn't hurt. Since then the situation has definitely improved, so much so that I had no complaints or concerns the next time I saw my OB. But there are still times when my hormones shift and sex does get painful, and when that happens now I have no problems telling my partner that either it's not happening at all or that we're going to have to think outside the box.

Dealing with painful sex after pregnancy definitely brought me closer to my partner. There's nothing I won't share with him now. But even though our relationship is stronger for it, I'd still go back and change how I handled things if I could. There's no need for a mom to be embarrassed over enjoying sex, and certainty no reason for her to cope with pain during having it.

More Like This
6 Sex Positions To Reduce Leg Pain
The Best Couch Sex Positions
Widows Are Expected To Mourn Forever — How Do I Date Again Without Shame?
How To Tell If Someone Is Lying To You: 34 Signs To Watch For