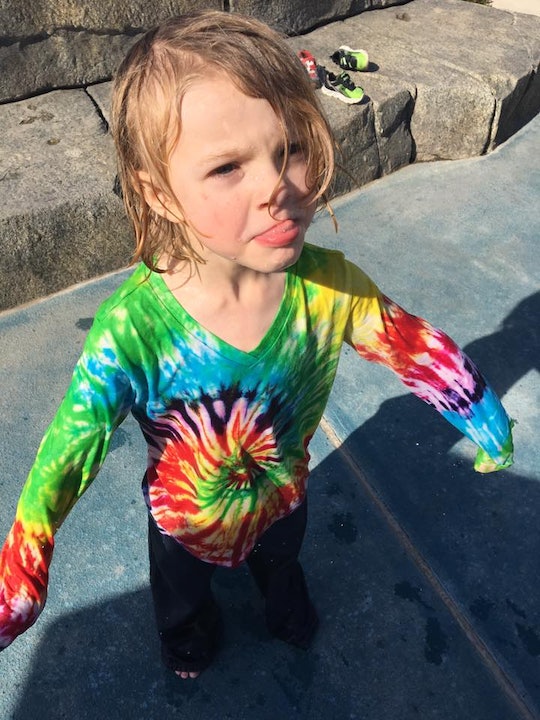 TBH, I Hate Being Alone With My Kids

It usually starts when we’re in the car, right after my 3-year-old falls asleep. When we get home, I know I'll have to wake him up, which will piss him off, which will begin a cycle of crying and tantrum-throwing that will last until he eats dinner. Meanwhile, my other sons will begin to fight, usually over what to watch on TV. The oldest wants to watch Star Wars: Clone Wars. The middle one wants to watch Ninjago or some sh*t. And the baby wants to watch Storybots, and he will scream until you know it. When this happens, all I want to do is put my hands over my ears and yell at them to shut up, shut up, shut up please, just shut up.

I’m a stay-at-home mom who homeschools her kids. I come up with my own curriculum, help my kids construct Roman amphora, and play Hamilton in the car for them on full blast, because it makes them happy. I spend a lot of time with my kids — sometimes as much as 12 hours a day, if my husband comes home late from work. I love my kids. I love being around them. I would do anything for them. But sometimes, I absolutely hate being alone with my kids.

Most moms think you have to love being around your kids all the time, but I don't think that's true. My kids are creatures with interests that are inherently different from mine: they love The Cat in the Hat, Ninjago, scattering plastic Revolutionary War figures throughout my living room, building forts out of all my pillows (but not out of the awesome fort-building kit I bought them), and throwing marbles at each other. I'm not a fan of...well, any of those things.

Moms are under pressure to engage with their kids all the damn time. When we don't want to, and we're just plain sick of being alone with them, we feel like horrible monsters.

When my kids fight or tear up the house, I usually try to ignore them and clean something, which usually makes me angry because the house shouldn’t be a mess in the first place. I should just give up and retreat to my room and read a book. That would be the healthy thing to do. But I don't do it, because it feels like something of a cop-out.

Moms are under pressure to engage with their kids all the damn time. When we don't want to, and we're just plain sick of being alone with them, we feel like horrible monsters. So I try to engage with my kids, even when I'm frustrated with them. Sometimes, we'll make art, or do some pottery. But usually, midway through the art project, I start to get antsy. I want these kids gone. I’m tired, and they start doing stupid sh*t, like messing up the clay on purpose or throwing it on the floor. And God help us if we’re painting. Usually, the paint will be smeared all over my bathroom before the day is done.

Sometimes, if I've been cooped up alone with the kids too long, I'll take them to the local botanical garden/splash-pad, unless it's too damn hot, in which case I'll take them to the regular museum or the kids’ museum. But I know that I’ll only end up playing on my phone, feeling guilty about playing on my phone, and wishing I were someplace else, or at least with another adult. Because unless you’re like, 6, those places are grade-A bo-ring. The kids spend the whole time telling me what they've learned about dinosaurs, and here’s a little secret: I do not give a f*ck about dinosaurs. Things I also do not give a f*ck about: trains, firetrucks, seismic activity, fire safety.

Having another adult around keeps me grounded

If the weather is bad and I absolutely cannot take them outdoors, sometimes I'll call a babysitter, particularly if I know my husband will be late coming home from work. I know that by the time 2:30 rolls around, if I look at the clock and realize I have hours and hours left alone with them, I might curl up in a ball and cry.

Sometimes, I just don’t want to be alone with my kids. It’s not my kids’ fault. They tend to be delightful, and while I don’t exactly love their dinosaur conversations, we can bond over Hamilton and pottery. But having another adult around keeps me grounded. It keeps me amused. It's nice to have someone else around to relieve me when the baby starts crying for juice and there’s juice on the table already. Sometimes, I don't even want someone to help me parent, so much as I want someone to stand there, sip Starbucks, and give me an excuse not to feel guilty about just turning on the TV for my kids. And that, in the end, is what friends are for.