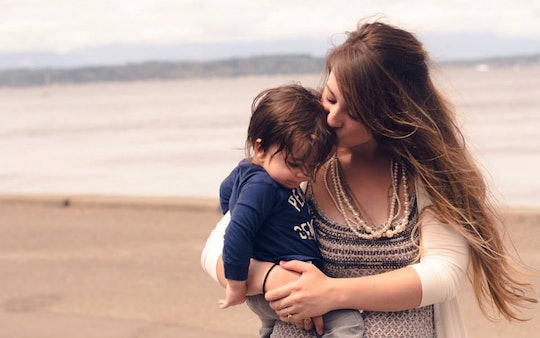 Honestly, Sometimes I Wish I Wasn't A Mom

I'm sitting on my couch, typing laboriously and trying to finish an article that requires my focus, my undivided attention and a steady stream of thought. I've already worked 11 hours and just finished making dinner and I'm too exhausted to even guess how many hours of work I have left. As I pour through the mental scroll in my head, my son is climbing on top of me and yelling in my ear and tugging at my sleeve, all in an attempt to show me the latest toy in his new room. It is in this moment, this seemingly adorable yet somewhat frustrating moment, that I wish I wasn't a mom.

These moments come and go, usually when my son wants more than I feel I'm able to give. When things are made more difficult by his presence — because yes, having a child does make things more difficult — I all but throw my hands up in utter defeat. When my son is doing nothing but being a toddler, which means he's throwing a tantrum about something minuscule to my life but catastrophic in his, I contemplate how easy it would be to sit on my couch, write my latest article, cook dinner, or do one of the many things I do in a day without him. On nights like these, I resent my son's presence. And even though I can rationalize these very valid, very undeniable feelings, they have the power to throw me down a spiral of guilt, embarrassment, and overwhelming shame.

I wish feeling this way didn't make me feel such overwhelming shame. I wish that I could talk about the fact that motherhood is exhausting or say that motherhood isn't the only life-defining part of who I am without worrying about the reaction or the repercussions. Even typing this, I know there will be people who automatically assume I spend all day, every day, wishing I wasn't a parent. Some will think I feel like I made a mistake by becoming a parent, or, worst of all, they'll believe my son isn't loved or an important, vital part of my life. I wish that, like almost anything else, this admission that life would be easier without a kid would serve as nothing more than a statement of how I feel rather than a intimate glimpse inside my most private thoughts.

Sometimes I wish I wasn't a mother, but I'd never dream of giving my son "back" or want to live in a world where he didn't exist and I wasn't his mother.

In college, on late nights, during last-minute study sessions, and when I'd feverishly write papers I'd procrastinated over for much too long, I'd often wish I wasn't in college anymore. But looking back, I loved being in college and wouldn't change my experience there for the world. When working three jobs, I often wished I was back in high school when I had parents to pay for damn near everything. But clearly, going back to high school would be the absolute worst. When I moved, especially when I was knee-deep in an endless sea of boxes, sleep deprived, and cleaning dust bunnies that should have been cleaned up years earlier, I wished I wasn't moving. Turns out, moving across the country is one of the best things to ever happen to me.

And in my romantic relationships, whenever we had passionate disagreements, I'd often wish I was single again. Of course, I'm so very thankful for my partner and would never want our relationship to end. Motherhood is no different. Sometimes I wish I wasn't a mother, but I'd never dream of giving my son "back" or want to live in a world where he didn't exist and I wasn't his mother.

It's nice to have a break and take care of myself — and only myself — and it's sometimes necessary for me to imagine how easy things would be if I wasn't a mom, but if I could go back and do it all over again, I know I'd never decide not be his mother.

But would I ever run away and leave my family behind? Absolutely not. Would I ever take back my choice to have a baby? No way. Would I want to live my life without my son? Not even for a second. It's nice to have a break and take care of myself — and only myself — and it's sometimes necessary for me to imagine how easy things would be if I wasn't a mom, but if I could go back and do it all over again, I know I'd never decide not be his mother. My son has changed my life for the better, even if "better" sometimes means exhausting, frustrating, and difficult. My son is a part of the world that gives me such complete joy, even when that "joy" comes with tantrums, outbursts, and ineffectual, flying fists.

The fleeting moments where I wonder why I ever decided to become a mother do nothing to change the fact that I am one and that I love being one and that my son is one of the best things to ever happen to me. When my frustration and exhaustion and lack of patience culminate into a guilt-ridden moment of resentment, there's always a part of me that's still thankful for being frustrated and exhausted and impatient.

I can't pretend I don't experience moments when I wish I wasn't a mother, but I know these moments won't ever define the kind of mother I am. I might have fleeting thoughts of unabashed freedom from time to time, especially when parenthood tests me most, but there's no way I would ever give up being a mother.