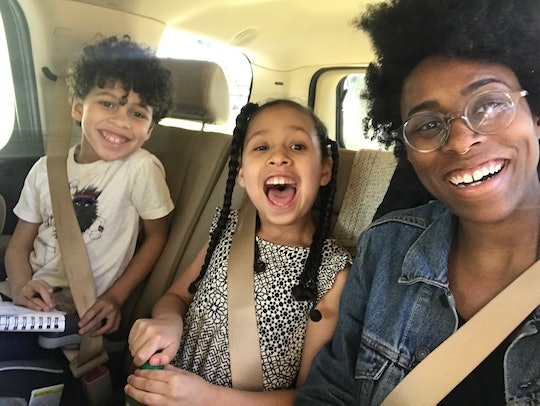 TBH, I'm Uncomfortable With My Kids Having White Friends

Once, I was at a friend's house with my two kids and her two children. At one point, the oldest of her two kids walked up to my daughter and said, "Why did God give you this gross hair? Why didn't he give you princess hair like mine?" I just stared at her, because I couldn't fathom why she would ever say something like that. But thankfully, my daughter didn't get upset. Instead, she retorted, "My hair is perfect. I have a black mom and a white dad, so it actually makes my hair better than your straight hair." Then she went back to playing. This was about three years ago. It was the moment that I realized that not everyone talks to their children about race, which can put my children in an uncomfortable position — and I want to avoid putting them in that position whenever possible.

My children are black and white. They're extremely proud of their race, but still, I get nervous when my kids make friends with white children. That's not because I'm anti-white, or because I think that white children make terrible friends. It's more that I get nervous about what these children are being taught in their homes by their white parents. I get nervous about the language used, statements like "We don't see color!" or "We don't even notice that your son/daughter is black!" Or even, "We don't talk about race with our children. It's too much for them right now."

My children know who they are and where they came from. They have been raised to celebrate, acknowledge, and honor their heritage. The thought of sending them to play in a home where that would be questioned, challenged, or in some cases completely ignored, leaves me wanting to avoid playdates with most white families.

In the past, I never really thought about my children making friends with white children. For the most part, I was just happy they were making friends. But one day at my son Beck's preschool, I was talking to another mother about being black and raising a mixed son. She turned to me and said, "We don't even see Beck's color! He's just Chance's friend!"

It felt like someone had kicked me in my stomach. When someone says they don't see color, they're simply stating that they refuse to acknowledge someone else's ethnicity, thus erasing their background and culture. I couldn't respond to what she said. She stood there smiling at me, as if I should be thanking her for saying that, when all I wanted to do was shake her and say, "How do you not see that he's black? It's OK to see that!"

After that conversation, I stopped working as hard to make playdates with her and her son. My son would ask almost daily when their next playdate would be, but I always said, "Hopefully, soon," knowing that it wasn't going to happen.

"I'm a photographer and a writer," I tell them. "I write about raising black children, being a black parent, and what it's like to be black in America." For me, this is a not-so-subtle way of saying, "Race is an extremely important part of our lives and our identities."

We live about 20 minutes outside of a big city, and the school my kids attend is in the suburbs, which means that their school is 90% white. That means making playdates with white kids is kind of unavoidable, but I try to do a sort of vetting process with parents beforehand. The vetting starts the moment my children introduce me to another kid's parents. I start by just talking about the work I do.

"I'm a photographer and a writer," I tell them. "I write about raising black children, being a black parent, and what it's like to be black in America." For me, this is a not-so-subtle way of saying, "Race is an extremely important part of our lives and our identities."

The ideal answer is usually just a simple "That's interesting! I'd love to read what you write," or even a simple, honest answer about not knowing much about race relations in our country. But sometimes, it's something like, "Oh, we don't see color in our home!" At that point, I make a mental note that we will not be making playdates with that family. Same goes for: "Oh, wow, you're really into politics then? That's not really something I have interest in." When someone says they don't believe in being political, it shows both how privileged they are and how they are actively choosing to remain ignorant of politics, despite the current political climate.

It's not that I think families of color can't be friends with white families. Of course they can. It's more that I'm concerned about how white parents are raising white children. I'm concerned that they don't have conversations about race in their home, and that if they do, they don't skip over important aspects like slavery, and how it's created a foundation of racism in our country.

Our home is a place where compassion comes first. We don't water down discussions of race to exclude the realities of white supremacy. We talk about it. We talk about being black, about the white side of the family, about what it means to have light skin privilege, which my children have. We make sure that whoever comes over is respected and loved, but who they are is never neglected or ignored. We honor the cultures, traditions, and stories that are carried into our home by those who visit us. We don't silence anyone, in ways that I've seen other parents do to my children when they talk about being black. I've seen parents say to my kids "We haven't talked to them about black people yet, they're not ready." My children are confused by this. How is who they are something to talk about "later"? And why do my young children have to conceal their pride to make white children more comfortable?

Unless white parents are doing the necessary work to dismantle racism, like having frank conversations about race with their own children, addressing their own racial biases, and talking about the realities of white privilege, my children will not be having playdates with those families. I will not go out of my way to educate white parents on how to treat my children with respect and dignity. They should already be doing that.

More Like This
Ashley Graham On The “Fun, Organized Chaos” Of Raising Twins
These Stepmother's Day Instagram Captions Are Straight From The Heart
Stepmom Quotes & Sayings For Every Occasion
10 Of Céline Dion's Best Quotes on Motherhood