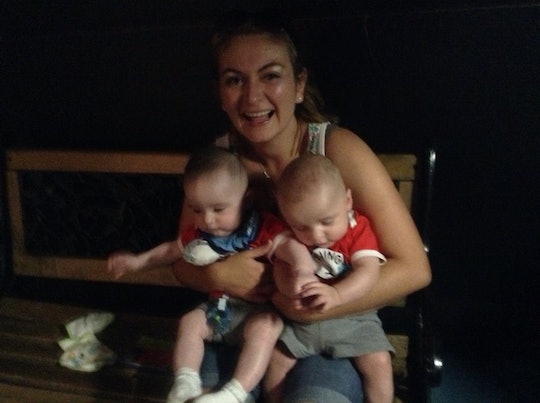 Honestly, The Hardest Part Of Parenting Is Making Friends

Whether it was chatting up other kids at the pool back in elementary school or making new friends in college, I've always had a huge social circle. But once I graduated and moved away for work and then got married, things changed. My jam-packed calendar turned into occasional happy hours with coworkers and rare girls' nights with my close girlfriends that had to be planned out weeks in advance. When I left my job to become a stay-at-home mom to my twin boys, I was excited at the thought of making friends with other women who were in a similar place in their lives, sharing playdates and snacks with them while our kids ran around and had fun. But it turns out making friends as a new parent is a lot harder than I thought it would be. My boys are almost 4 years old and in that entire time I've been their mom, I still haven't made a single mom friend.

Just getting out of the house to meet people who could become potential new friends once you're a parent takes superhuman levels of strength. You know how 20-somethings tend to meet people in bars? Well, new moms tend to meet at baby classes. But these music or Baby and Me yoga classes are usually only 20-30 minutes long, and changing and dressing the boys, packing a diaper bag, and then finally loading them into the car to get there even close to on time takes nearly as long as the class itself. In those early days when postpartum hormones often made me feel sad or low, it was hard to motivate myself to get packed up to go to an infant music class because it felt like we barely made it there before we had to turn around to come back home again.

And in the winter months, I had to decide if I wanted to take my new preemie babies into a room filled with other infants and toddlers who could possibly be fighting off winter colds, or stay at home where there was lots of antibacterial and less germs. Sometimes I'd take the boys out only to have them come down with a virus days later, and when they'd spend the next week sick, I'd beat myself up for getting them sick just because I wanted to socialize.

Rather than chat in a get-to-know-you way, other parents would ask me questions about what it was like to have twins, their eyes wide with horror as I described what our overnight routine looked like. I felt like an attraction rather than a fellow parent they were interested in possibly becoming friends with.

Now, let's assume that if I ever did successfully make it to a baby class, the job of making new friends requires the art of small talk. Since I'm married, out of college, and haven't had a new job in a while, my getting-to-know-you conversation skills are rusty. And it's strange when you're talking with a fellow mother for the first time because so much of the conversation is focused on your kids. Age, gender, birth date, milestones — there's a script all new parents stick to when talking for the first time. I love my kids obviously, but I'm in the market for a friend I'm going to get along with me, not them; someone who will understand my pop-culture references and sing along to old Britney songs. I don't really care if our kids happen to go to the same pediatrician, but there doesn't seem to be a way to skip past these initial levels of conversation to get to the real meat of who a person is when you first meet. How is it that Match or Tinder for finding moms friends not a thing?

Now that my twins are older, not many people notice that they're the same age, but when they were infants, the fact that I had two babies made me feel like an outsider among the other parents. W'd sidle up to the circle for story time at the library and I'd plaster a giant smile on my face and try to look friendly. But rather than chat in a get-to-know-you way, other parents would ask me questions about what it was like to have twins, their eyes wide with horror as I described what our overnight routine looked like. I felt like an attraction rather than a fellow parent they were interested in possibly becoming friends with.

Assuming you do hit it off with another mom and manage to start talking about something besides how hard it is to get a baby to eat puréed peas, it's not easy to dive into a new friendship when you've got kids underfoot. If you're at music class or story time, at some point the instructor is going to want you to stop chatting and start singing "I'm a Little Teapot" along with her. Or if you're at the playground, it's hard to keep up a conversation about last night's episode of American Horror Story with your new friend when you're trying to stop your kid from eating sand and she's grabbing her child before they swan dive off the top of the slide.

I pumped myself up in the mirror and told myself to just ask for her number. I thought I'd suggest hitting up that other class together next week, but when I came back to the room, she and her daughter were gone.

I thought being a stay-at-home mom would leave me with more down time, but with two super active kids I'm always chasing around, I don't have a lot of time to chat with other moms, even when I do manage to find ones I think are cool.

Once I spent a library music class chatting up a sassy woman who had quirky glasses and a scarf I could totally see myself borrowing. We joked about how silly the songs were, how some of the other women there were way too into knowing all the lyrics, and how we expected them to wave their cell phones in the air or ask the librarian for her autograph afterwards. I had stars in my eyes for her. She was super chill, our kids played super well together, and when I pulled out a pouch of apple sauce as a snack, she didn't say anything about GMOs or how it would actually be cheaper to make my own. Instead, she pulled out a granola bar for her own kid. I could absolutely see us being real friends, the kind who hang out in each other's houses without cleaning up first.

She mentioned there was a much better music class across town I should check out sometime, so I thought she felt the same way about me as I did about her. One of my boys chose that moment to have a diaper blow out, so I gathered up my kids and headed to the bathroom. While I was there, I pumped myself up in the mirror and told myself to just ask for her number. I thought I'd suggest hitting up that other class together next week, but when I came back to the room, she and her daughter were gone, the empty granola wrapper on the carpet the only proof that my dream mom friend ever existed in the first place.

These days, my kids just started going to preschool few days a week. Each morning at drop off I take a few minutes to chat with the moms of their classmates. Last week, we all did did the tentative exchanging of phone numbers, and someone mentioned getting coffee one day. It's still early, but I'm hopeful that after nearly four years, maybe, just maybe, I might finally make a mom friend.