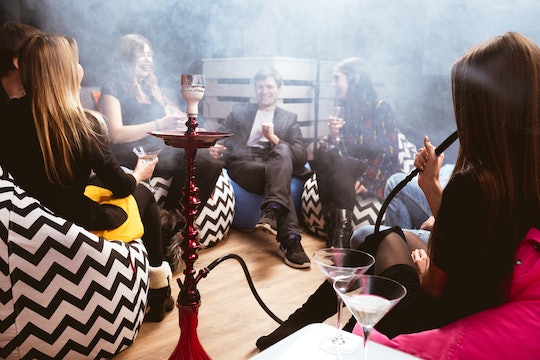 For the most part, pregnant women try to reduce or avoid their exposure to tobacco products while they're expecting, and this sense of caution applies to hookah pipes as well. You're not likely to see a Lamaze class sharing a water pipe at the local hookah cafe, in other words. But can your partner smoke hookah when you're pregnant, and is secondhand hookah smoke even a thing?

For the most part, experts caution pregnant women to avoid exposure to hookah smoke, because it poses many health risks to the baby. "It is very clear that being exposed to smoke from hookahs (second hand smoke) causes many of the same effects as being exposed to second hand smoke from cigarettes," says Scott E. Sherman, co-chief of the Section on Tobacco, Alcohol and Drug Use in the Department of Population Health at New York University Langone. In one of his studies, non-smoking volunteers who entered hookah bars in New York City were found to absorb hazardous amounts of smoke, even if they didn't hit up the water pipe firsthand.

In another study conducted in Dubai and Abu Dhabi, Sherman concluded that being exposed to secondhand hookah smoke was even worse than secondhand cigarette smoke. "This study says that telling people to stay out of the room in which hookah is being smoked is not enough to keep them safe," says Sherman. If you're pregnant, then seriously avoiding any exposure to hookah smoke is wise.

In addition, hookah smoke may be especially dangerous because carbon monoxide exposure is a real possibility. "Avoid smoking during pregnancy because, although hookah smoke is much less chemically concentrated than cigarette smoke, its smoke still contains carbon monoxide which is generated, not by the smoking mixture (mu'assal) but by the charcoal," says Kamal Chaouachi, a pioneer in the studies of hookah and health since the '90s. Inhaling too much carbon monoxide can cause flu-like symptoms and even kill you, as noted by the Centers for Disease Control and Prevention (CDC). It's why you have carbon monoxide detectors in your home. In fact, there have even been cases of carbon monoxide poisoning following the use of a hookah pipe, although thankfully none of them proved fatal, as explained in the Deutsches Ärzteblatt International. It's not something to mess around with, especially for pregnant people.

Despite these warnings, doesn't it feel like hookah is less terrible for you than cigarettes, though? There are a few reasons people may hold this belief. (Confession: I definitely thought this in college). As Chaouachi explains, people are less likely to develop a dependence to hookah than cigarettes, and some anti-smoking campaigns have even established that hookah smoke is less concentrated in hazardous chemicals than cigarette smoke.

For whatever reason, something about the ritual of using a water pipe and enjoying candy-flavored smoke make hookah feel comparatively harmless. However, smoking hookah poses many of the same risks as smoking cigarettes, including exposure to potentially cancer-causing chemicals, as explained by the CDC. The bad stuff does not all get filtered out by the hookah's water pipe (something I also believed in college).

Basically, current studies suggest exposure to hookah is as bad, or perhaps even worse, than cigarette smoke in terms of fetal health and development. Because hookah users exhale about 50–100 liters in each smoking session, people who breathe the secondhand smoke may be exposed to especially high levels of toxicants, according to a 2011 study comparing hookah and cigarette smoke in the Nicotine & Tobacco Research journal.

Due to the amount of secondhand smoke hookah users produce, as well as the general toxicity of the hookah smoke, limiting exposure to it is wise for pregnant women. In fact, "relative to cigarette smoke, waterpipe smoke exposure during pregnancy might be expected to have similar or even more harmful consequences for fetal health," as explained in a 2013 study about pregnant women and water pipe smoke in the Nicotine & Tobacco Research journal. Secondhand hookah smoke is far from harmless.

What about those herbal blends? Even smoking the hookah without any tobacco is potentially dangerous. Herbal shisha and tobacco-free hookah are sometimes made from herbal molases or tea leaves, and they offer flavored smoke or steam without any nicotine. Although foregoing the addictive nicotine sounds like a better option, this form of hookah is not without risks. In fact, smoke from tobacco-free hookah was found to contain "nearly equal amounts of toxicants known to contribute to the risk of tobacco-caused cancer, cardiovascular disease, and lung disease" when compared to traditional tobacco hookah, as noted by a 2013 study in Food and Chemical Toxicology journal.

How is that even possible? You're just breathing in flavored steam and smoke, right? Again, the burning charcoal used to heat hookah produces carbon monoxide (CO) and polyaromatic hydrocarbons (PAH), as noted in a 2008 study from Food and Chemical Toxicology journal. CO is bad news, and exposure to polyaromatic hydrocarbons (PAH) can result in eye or breathing irritations, and some mixtures of PAHs are considered cancer-causing compounds, according to the Centers for Disease Control and Prevention. Basically, avoiding the burning coal from hookah is important for your health, as well as your baby's well-being.

Please note that this isn't meant to hookah-shame anyone or demonize this popular past time. Even Chaouachi cautions against overemphasizing the negative effects of secondhand hookah smoke, especially when encountered in casual social situations. Basically, smoking hookah once or twice a week in a well-ventilated area may not seriously hurt an adult, but it's definitely not worth risking the health of a developing baby.

Overall, it's important to know that secondhand hookah smoke — or any smoke — may pose a serious health risk to your developing baby. Your partner should refrain from smoking it in your home. "[O]ur study in Dubai and Abu Dhabi shows that fathers and visitors who want to smoke hookah should make sure that they do not do it anywhere in the home," says Sherman. Maybe the hookah pipe can just be a piece of decor for the remainder of your pregnancy.