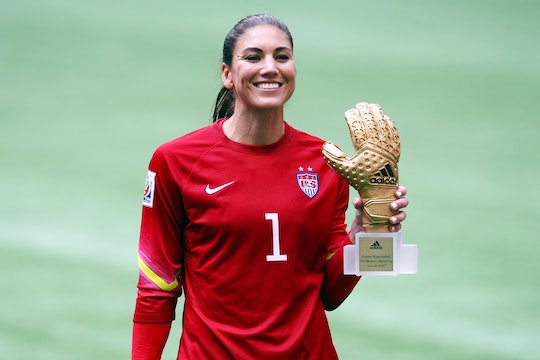 A two-time World Champion and former member of the U.S. women's national soccer team is on her way to having her own "miniature soccer team." More than a year after suffering a miscarriage, Hope Solo revealed she's pregnant with twins during an appearance on BeIN Sports on Monday. The former soccer star is married to former NFL tight-end Jerramy Stevens.

"My husband and I get to practice equality from the very beginning with one boy and one girl," Solo told BeIN Sports host George D. Metellus. "Miniature soccer team on the way."

Earlier in the day, the 38-year-old former soccer star had encouraged her Twitter followers to tune in to BeIN Sports' Weekend Winners segment "to catch the announcement of the birth of my newest adventure."

News of her pregnancy comes roughly six months after Solo revealed she'd suffered a miscarriage most likely caused by an ectopic pregnancy. In an interview with ELLE in June 2018, Solo said she'd suffered a miscarriage while campaigning for the United States Soccer Federation presidential election earlier that year. The former soccer star said she later learned that she'd actually been pregnant with twins, one of which was ectopic, meaning it had been growing outside of the uterus.

"The doctor said I was hours from dying," she told ELLE. "They ended up having to remove my fallopian tube." Solo went on to tell the magazine that she and Stevens had since begun in vitro fertilization (IVF) in hopes of becoming pregnant again.

Although known as one of the most dominate goalkeepers in U.S. soccer history, Solo's career on the field came to an end earlier than planned in 2016. After losing to Sweden at the Rio 2016 Summer Olympics, Solo appeared to refer to the Swedish team as "cowards" for playing defensively. Her comments weren't received well and resulted in the U.S. Soccer Federation both suspending her and terminating her contract. Since then, Solo and Stevens have relocated to a 50-acre estate in North Carolina, where they keep chickens and dogs, the Associated Press reported.

Sounds like plenty of room to put down a playing field for the miniature soccer team Solo and Stevens are hoping to form.