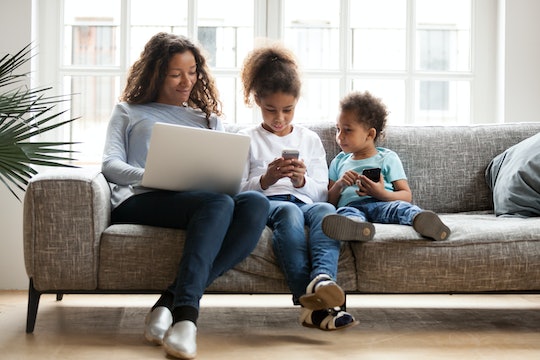 OMG! Smartphones Can Cause A Horn To Grow Out Of Your Skull?!

Cellphones have changed immensely since they were first released. Nowadays there's almost nothing you can't conveniently accomplish with just a few taps on your screen, but spending so much time glued to our phones isn't healthy. By now, you probably know that cellphones are taking a toll on our social skills and our sleep cycles, among other things, but it appears extreme cellphone us is also having some evolutionary effects. According to a recent study horns growing on your skull might be thanks to using a smartphone, which should be all the reason you should need to put down the phone and spend a little time in the real world.

Bony growths, or bone spurs, were found at the bases of skulls in roughly 400 adults between the ages of 18 to 86, Scientific Reports found. That's right, it's not just millennials or young people who are being affected — this time, anyway. We see you, Gen X.

Researchers referred to the horns as "prominent exostosis ... emanating from the external occipital proturbance." To put it simply, though, they're bony growths forming at the edges of existing bones, often caused by repetitive motions....like looking down to check your texts, Twitter mentions, and Instagram DMs, NBC News reported. Scientific Findings' study did state that young people had larger growths than the older people. It's unclear if that's because they're spending more time on their phones or simply because their bodies are developing amid the age of technology.

The study's authors attributed the growths mostly to extended periods of time spent looking down at phones, tablets and other such devices. The "forward head flexion," or bending the head down, and bad posture are likely the cause of the horn growth, scientists theorized. According to NBC News, most bone spurs don't cause any discomfort or require treatment. They can, however, if they reach a certain size, so now might be a good time to reconsider how much time you're spending on your phone — or set limits for yourself and your kids.

"Although the 'tablet revolution' is fully and effectively entrenched in our daily activities, we must be reminded that these devices are only a decade old and it may be that related symptomatic disorders are only now emerging," the study's authors wrote.

This isn't the first scientists have reported on smartphone use effecting the body. A 2011 study on Science Direct found that avid smartphone users had begun experiencing neck pain. About 68 percent of the people who participated in the study, conducted in Canada, reported having issues with their neck.

Smartphones don't just affect us physically. As noted by Business Insider, research has shown that using your smartphone before bed can throw off your sleep cycle. This is in part because of the kind of light emitted from your phone, but also because of the distraction social media and other such content creates.

"Not only does the bright light emitted by digital devices impact our sleep, but social media content distracts and entertains us, too," Dr. Suzana E. Flores told Business Insider.

The outlet also found that smartphones can create rifts in romantic relationships, ruin friendships, and get in the way of parenting. My own son is quick to point out when I'm distracted on my phone, which is just what I need sometimes to snap back to reality. A massive international study of 6,000 kids ranging in age from 8 to 13 found that 32 percent of kids felt "unimportant" when their parents were on the phone during meals, while talking with them, or during other times deemed "family time," according to Psychology Today. More than half the kids surveyed said their parents spent too much time on their phones, which could set a bad example for children as they get older and get their hands on phones of their own.

While developing horns is pretty jarring, it should come as no surprise to most adults that extended cellphone use has adverse effects on your body and overall health. If nothing else, this recent study serves as a solid reminder that whatever's going on inside your phone can wait. Unplug and take some time to recharge your own batteries. Texts, emails, and Twitter can wait.