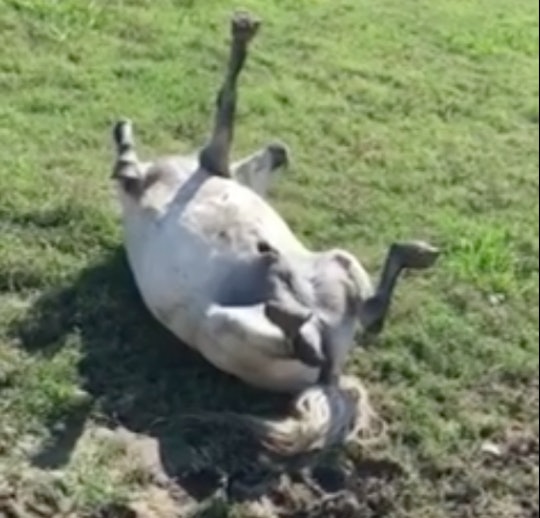 We've all been there. There are days when all you want to do is lay on the ground and never get up. But playing dead isn't just for dogs and humans. One North Texas woman was annoyed to find her horse, Pinto, at it again. In a hilarious, now-viral video, the exasperated woman finds her horse on its back with its legs straight into the air. It's undeniably amusing — and perhaps, on some level, that crazy Texas horse playing dead like a pet dog serves to us all that, even with all the awful political brawling, mass terror, and unapologetic assault making headlines these days, the world isn't such a terrible place after all.

In the viral video, Pinto's owner can be heard yelling at the obviously joyful horse. "Why do you keep playing dead? Get up Pinto!" she yells. "You embarrass me in front of the neighbors." But its no use. Pinto protests with loud neighs at his owner and does not budge.

The video, which has been viewed more than 33 million times, has subsequently made Pinto an internet sensation. According to Pinto's owner, however, she decided to publish the video after a contractor called her about a "dead horse" on her property. She said she assured him that it was just Pinto up to his old tricks.

The owner, whose profile is under the name "Mark N Kelley," detailed the conversation on Facebook:

Electrical contractors called me. "Ma'am, you've got a dead horse here in your pasture." "No I don't, he plays dead all the time. Is his leg sticking straight up in the air?" "Yes ma'am. I'm telling you he's dead. The leg sticking up is because rigor mortis has set in ma'am, I know horses, I own a few." "Sir, my horse ain't dead. He plays possum."

After the video went viral, the owner posted a second clip, showing Pinto in action yet again.

"Completely upside down, and just dead!" the owner narrates. Once again, Pinto lays completely still with his back on the lawn, and one leg sticking straight up. He stays that way despite the owner's honks and yells, only getting up when she throws a bit of dirt his way.

Pinto now has his own Facebook page, where fans can keep up with his antics.

Of course, the internet being the internet, not all the feedback was positive. The owner noted recently in a post that she'd received several questions about whether Pinto's behavior indicated he was in pain.

"Dear horsey people, Pinto is fine," she wrote. "Yes, horses do this when they are in pain sometimes. This has been Pinto's behavior for several years. He's okay."

With all the awful stuff going on in the world, can you blame him? I feel ya, Pinto.