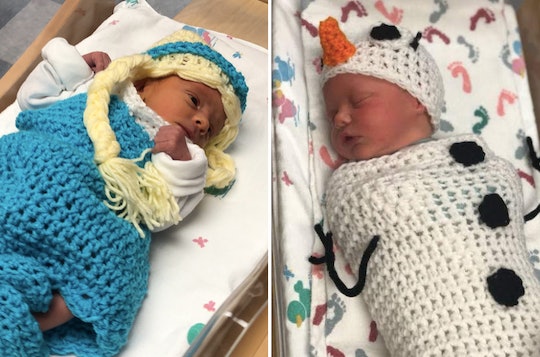 Although still too young to have ever actually seen Frozen, adorable newborns at Saint Luke's South Hospital are ready for their adventure out of Arendelle. To celebrate the sequel's theatrical release last week, the hospital dressed babies in crocheted Frozen 2 costumes that are, as Olaf would put it, definitely worth melting for again and again.

"Here's a little something to warm your heart," Saint Luke's Health System captioned posts shared on both Facebook and Twitter. "For the first time in forever, our babies at Saint Luke's South are dressing up for the release of #Frozen2!"

The non-profit network of bi-state Kansas City hospitals debuted their own Elsa, Anna, and Olaf (all three of whom were only 1 to 2 days old at the time) a day before the sequel hit theaters. And while Olaf is already a pretty cute and endearing character, he's got nothing on Saint Luke's itty bitty baby Olaf.

"Let them in! Let them see! Our maternity ward at Saint Luke's South has been Frozen over," the hospital network wrote. "Anna, Elsa, and Olaf are here and they all like warm hugs."

A spokesperson for Saint Luke's South Hospital tells Romper the hospital's maternity ward got the Frozen-inspired costumes — which included Anna's vibrantly colored dress and cape, Elsa's teal gown, and a snowman suit — from an Etsy shop known as Loveable Crochet.

Now, I know what you're thinking: A newborn doesn't have the hair to accurately pull off an Anna or Elsa costume. Well, there's a wig for that! Both baby Anna and baby Elsa sported flowing crocheted braids also made by Loveable Crochet.

While Saint Luke's miniature Frozen 2 cast melted hearts all across social media, it seems the babies' parents were also delighted by the surprise. "Thanks Saint Luke's for letting my little Charlotte be princess Anna for a day!" a Facebook user who identified themselves as one of the babe's parents commented on the hospital's post. "It was so cute and fun. We loved every minute of it."

The hospital network tells Romper that maternity and NICU nurses "routinely do special events and costumes" for NICU babies and their families as a means of marking different holidays. "We wanted to do something really fun and memorable for our regular maternity families and the opening of Frozen 2, which so many people were so excited about, felt like a great opportunity to do something creative and unique," Saint Luke's Health System spokesperson Emily Hohenberg says. "The families were so thrilled and happy to participate - and they absolutely LOVED the costumes."

But while Elsa sings about needing to "let it go" in Frozen, Saint Luke's tells Romper the three crocheted costumes were gifted to the newborns' families so no one had to let go of this sweet and special memory.