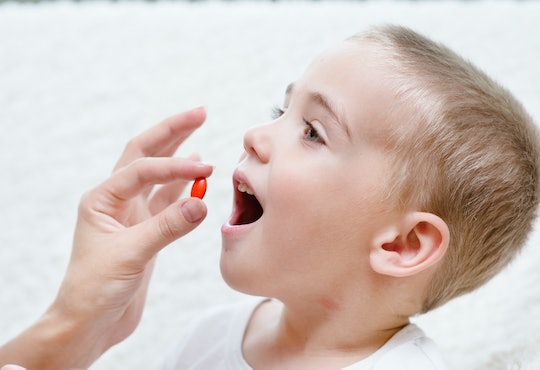 Hospitals Are Giving Kids Too Many Antibiotics, Study Says, & Here's Why That's Dangerous

The discovery of antibiotics changed modern medicine, and has undoubtedly saved countless lives. But modern attitudes toward the drugs may be changing things again, and for the worse. A new study published in the Journal of the Pediatric Infectious Diseases Society has found that hospitals are giving kids too many antibiotics, a practice that's leading to the rise in antibiotic resistance in patients, and a rise in the incidence of drug-resistant infections. The authors surveyed 226 pediatric hospitals in 41 countries, with a total sample size of 17,693 patients. Of those, 36.7 percent received antibiotics. Among 6,818 inpatient children, 32.9 percent received at least one antibiotic, and nearly half of those were prescribed two or more. More than half of prescriptions were for broad-spectrum antibiotics.

Of the total 11,899 antibiotic prescriptions, 28.6 percent were provided for prophylactic use, that is, to prevent a possible infection, rather than treat one that had already been diagnosed, according to the study. This is common among surgical patients, 79.7 percent of whom received such drugs for more than one day. Nearly one-third of all antibiotics prescribed to hospitalized children were prophylactic. Current guidelines for prophylactic antibiotics generally recommend narrow-spectrum antibiotics for shorter periods of time, as over-prescribing broad-spectrum antibiotics, unnecessary antibiotics, or longer courses of the drugs can all lead to the development of antibiotic-resistant bacteria and drug-resistant infections, according to Science Daily.

The problem isn't limited to children or hospitals, either. A Public Health England study found that family doctors are erroneously prescribing antibiotics to one in five patients who has a cough or sore throat, but no medical need for a prescription, according to The Guardian. Health records revealed that for one-third of all cases, doctors did not cite any clinical reason for issuing antibiotic prescriptions. Experts said that only 10 percent of patients with a cough actually need antibiotics, but 41 percent received them and 59 percent of patients received antibiotics for a sore throat, when only 13 percent had a clinical need for the drugs.

For other maladies, the numbers are even worse. Public Health England also found that 88 percent of sinusitis cases are treated with antibiotics (only 11 percent require them), 82 percent of patients with bronchitis received them (just 13 percent really needed them), and although only 17 percent of 2- to 18-year-olds with an ear infection needed a prescription, 92 went home with one. This is a serious problem; antibiotic resistance leads to about 25,000 deaths a year in Europe, The Guardian reported.

Across the pond, antibiotic resistance sends more than 2 million Americans to the doctor every year, according to Wired, costing us an extra $2.2 billion in health care spending annually. Antibiotics treat bacterial infections, but not viral ones. When a patient with a virus takes antibiotics unnecessarily, that gives bacteria a chance to build up a resistance to the drugs. And even when a patient does have a bacterial infection, doctors sometimes prescribe the wrong type of antibiotic, or the wrong dose, further exacerbating the problem.

Why are doctors giving patients the wrong drugs? Sometimes, according to Wired, they have to take their best guess, because they don't have time to wait for lab results to confirm a diagnosis. David Hyun, a pediatric infectious disease physician who conducted a research review into the issue told the magazine that doctors also tend to write more antibiotic prescriptions towards the end of the day, which might point to fatigue as another cause.

But the biggest problem is likely patients. Laypeople might not understand that antibiotics aren't always the right solution, but some doctors feel pressured to prescribe whatever the patient demands, lest they blast them on Yelp and then go somewhere else to get them. The takeaway: don't assume that you know what medication you or your child needs. Tell the doctor the symptoms, and trust their judgement when they diagnose you. They're the professionals. And as always, do not consult Dr. Google.