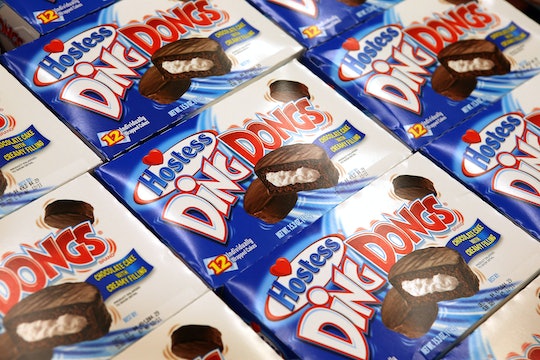 Hostess Recalls 700,000 Snacks Due To A Peanut Allergy Risk So Check Those Chocodiles

Bad news, junk food junkies. Hostess has recalled cases of snacks due to an allergy risk, according to Cosmopolitan. The recall includes Zingers, Chocodiles, Ding Dongs, and donuts. Check your pantries, because, so far, Hostess has recalled more than 700,000 cases of snacks after its flour supplier suffered a contamination from peanut residue, potentially endangering anyone with a peanut allergy who might think the Hostess snacks are safe to eat.

Hostess' flour supplier, Grain Craft, reported that some of its lots of flour have come into contact with peanut residue. Although the amount of peanut contamination is reported to be low, according to the Hostess Brands announcement of the recall, there is still a potential health risk to those with peanut allergies. So far, Hostess said it has only been notified of two allergic reactions and is taking the snack off the shelf "out of an abundance of caution," but if you're a mom with a kid with an acute peanut allergy, this could be a serious risk.

Peanut allergies in kids have tripled between 1997 and 2008, and approximately 3 million people in the United States report having an allergy to peanuts or some other tree nut, according to statistics from Food Allergy Research & Education. And for someone with a peanut allergy, reactions can vary from mild, like an itchy mouth or skin, to potentially deadly anaphylaxis.

Here is a full list of the recalled Hostess snacks and how to identify them by batch codes and best-by dates. The peanut-contaminated Hostess products include Chocodiles, Ding Dongs, both chocolate and raspberry Zingers, and donuts including glazed, maple, devil's food, chocolate, powdered, and crunch. All of the recalled baked goods appear to have "Best-By" dates between May and June 2016. If the snacks don't appear on the recall list, they are safe to eat, according to Hostess.

If you have a peanut allergy and have purchased the questionable cakes and donuts, you can return them to the place where you purchased them for a full refund, or you can call Hostess during business hours at 800-686-2813.

So, if you've got a cupboard full of Hostess treats and a sensitivity to peanuts, it's time to check your labels. And if you have someone in the household with a potentially deadly peanut allergy, just throw the snacks away and bring your proof of purchase to the store for your refund.