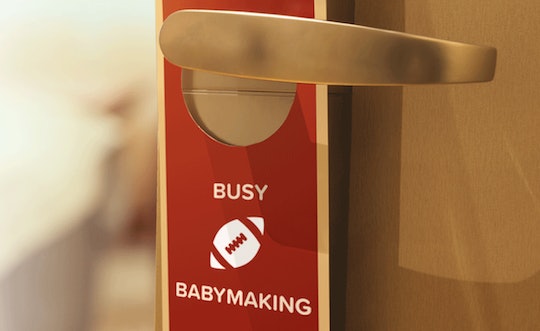 Hotels.com Legit Wants To *Give* You A Hotel Room So You Can Make A Super Bowl Baby

I grew up in the Pro Football Hall of Fame city, Canton, Ohio. When I was born, they put a pom pom in my bassinet with me, emblazoned with the image of the local high school football team's mascot on the button in the center. I grew up surrounded by all things football. Subsequently, I know a lot of people born in November, just a scant 40 weeks after the Big Game. Hotels.com is looking to help parents make their own "Big Game Babies," this year, and they're getting creative. Hotels.com is giving away free hotel rooms after the big game for a few lucky parents looking to score.

Post-Super Bowl game babies are definitely a thing. According to the press release from Hotels.com, "Every year, Super Bowl-winning cities report baby booms nine months after the game as a result of the, um, passionate celebrating going on after the big win." So they're looking to help potential future parents get the job done. Hotels.com is holding a contest and giving away one night in any of their hotels for 53 lucky guests after the Super Bowl. They are asking people to follow their Instagram and their Twitter for updates on the contest via the hashtag #biggamebabies, to enter immediately after the Big Game. The contest runs for 24 hours only, so get on that before you get on anything or anyone else.

If your team isn't on the side of winning, worry not, because Hotels.com has made a playlist specifically for getting down to business and getting in the mood, even if your team couldn't pull off the win. It includes songs like "Bed of Roses" by Bon Jovi and classics like "I Wanna Sex You Up" by Color Me Badd. And if you're listening to it in one of the 53 hotel rooms they give away on BigGameBabies.com, all the better. I know I feel sexier when I feel like I get a bargain. (I'm basically a fiend after I hit up the post-Christmas clearance at Target. Hello, $2 candles.)

The minute the Super Bowl ends, the contest opens for 24 hours only, and they are choosing 53 random winners to receive a voucher for one night in the hotel of their choice on Hotels.com. Whether you're looking for a chill vibe in Taos, New Mexico, like at El Monte Sagrado Living Resort & Spa, or something more lively and urban like the Marriott in Union Square, San Francisco, Hotels.com will have it. With their search functions and room preview, they make it easy to compare hotels and rooms.

As of right now, we know that the winner will be either the Saints, the Eagles, the Patriots, or the Chiefs. As luck would have it, there are some exceptional hotels in these four cities if you so choose. For instance, The Windsor Court Hotel in New Orleans (Who dat?) is just an eight-minute walk from Bourbon Street, which is just about perfect. Close enough that you can amble back to your room with a to-go hurricane full of rum, and far enough away for peace and quiet.

Or, if New England has occasion to win — again — you might consider staying at Boston's beautiful Revere Hotel in Boston Common. It's right in the Downtown area, walking distance from most of the city's main attractions. It has a lovely pool and well-equipped gym. And don't worry, I assume the balance balls in the gym are fully inflated.

No matter where you are, you'll want in on this contest, so head over to www.biggamebabies.com and register to win the second you see the Super Bowl trophy lifted in the air and a grown man sprayed with champagne and Gatorade.