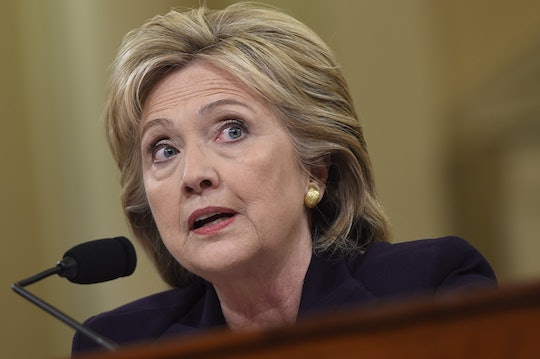 House Benghazi Committee Shuts Down & The Timing Is Suspiciously Convenient

It's easy to get caught up in the excitement of a presidential election and lose track of some of the main issues that were at the heart of the candidates' fight for the White House. Now that some time has passed, it's worth remembering that the Benghazi hearings played a large role in establishing Hillary Clinton's credibility as a public servant. On Monday, though, the House Select Benghazi Committee shut down quickly after filing its last report on the 2012 attack on the Libyan embassy that killed four Americans. The committee was formed in 2014 by Republicans who believed that it was Clinton's actions that led to American deaths. Over the course of two and a half years, the committee spent $7.8 million and Clinton provided over 11 hours of testimony, defending her actions as head of the State department.

On Monday, the House Select Committee on Benghazi submitted a final report of 322,000 words, according to USA Today. It doesn't include dissenting remarks from Democrats. The committee also submitted a report of its final findings in June, but the committee remained open to new leads throughout the final months of the election season. Monday's final report says that it "did not single out wrongdoing by then secretary of state Hillary Clinton.” Rep. Trey Gowdy of South Carolina, the head of the committee, said that this is the "final, definitive recounting" of the events leading up to, during, and after the 2012 attack. Well, that's settled then, right?

The Benghazi committee was supposed to be an investigation into a terrible tragedy to find out what went wrong. A good idea, for sure, but the way that it panned out over the past two years led many Democrats to think that it was a political maneuver to undermine Clinton during an upcoming election. The investigation went on for way too long — almost $8 million too long.

Democrats contend that it was an expensive way to cast doubt on Clinton's leadership capabilities. Republicans have maintained that it was a truth-finding mission. But it's worth a bipartisan eyebrow raise that the committee is shutting down so quickly now that Clinton won't be the next president.

At the Republican National Convention this summer, Patricia Smith, the mother of Sean Smith who was killed in the attack, gave an emotional speech about holding Clinton responsible for her son's death. A Trump administration was supposed to be dedicated to holding Clinton responsible for her alleged actions leading up to the attacks and her handling of the aftermath.

Do you remember "lock her up?" That was the chant that took over Trump rallies in reference to Clinton's role in the 2012 attack. For anyone looking to blame someone for the terrorist attack, the Benghazi Select Committee was, whether intentionally or not, there to guide them.

In Democrats' eyes, the timing is suspicious, to say the least. Democrats have long believed that the long, expensive hearings about the attack in Benghazi were politically motivated and a way to undermine Clinton's reputation during a contentious election season. Even some Republicans thought it was a political move rather than a substantive look into how to change protocols in the State department to avoid future attacks.

The timing of the final report and the shut down of the committee just before Trump takes office might be a coincidence. Or it's that Republicans are no longer worried about Clinton winning an election and don't have to point fingers anymore. If that's the case, every taxpayer should feel a little used.