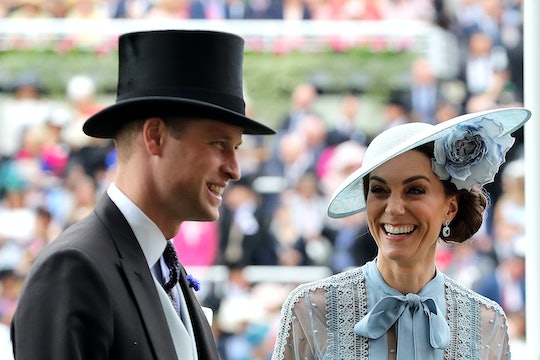 Don't Have A Cat? Prince William & Kate Middleton Could Potentially Be Your Neighbors

Good news for anyone who's ever dreamt of living like — or simply near — royalty: You may not be able to work your way into the royal family, but, as it turns out, you can live among them. Indeed, as Marie Claire reported, the house next door to Prince William and Kate Middleton is up for rent, so pack up your things and prepare to live like royalty in the small, picturesque English village of West Norfolk. Beyond the cool neighbor perks, renting the cottage is surprisingly cheap. But not just anyone can be the Duke and Duchess of Cambridge's neighbor — there are loads of criteria to meet to even be considered for the big move.

The home next door to Prince William and Middleton's Sandringham estate, Anmer Hall, is a two-bedroom cottage, according to The Sun. It's located just a short distance from the royals' home, and is available to rent for just £700 (about $851) a month. Not too shabby, right? The property does come unfurnished, according to The Sun, though it does have a "large garden." But those who hope to live there must meet specific criteria; as The Sun reported, the property apparently has a "strict no cats policy," but certain dogs will be considered.

Additionally, as the Sandringham Estate website reveals, those who already live and work in the Anmer area will be considered first, so for those across the pond or elsewhere, it sounds like you'll really have to impress the landlord. "Those moving to the area are also considered," the website states. "Properties are not let on a first come, first served basis, but rather on which prospective tenant is best suited to the property."

Though it's not their permanent residence, the Duke and Duchess of Cambridge do spend a decent amount of time at their Anmer Hall home, which they renovated in 2013, according to The Daily Express, adding a glass-roofed extension onto the kitchen of their cottage for "panoramic views." According to Hello! Magazine, they vacationed at Anmer Hall in August 2018, and in the winter of 2018, according to Hola!, the whole Cambridge crew reportedly spent some time of a "mini vacation" at Amner Hall. And before the Queen gifted Prince William and Middleton the home on her Sandringham estate, the royal family spent many Christmases there, according to Harper's Bazaar, which also reported that the cottage became theirs following their wedding in April 2011. They also lived their full time following Princess Charlotte's 2015 birth, according to Harper's Bazaar.

To be honest, I can't imagine anything cooler than being Prince William and Middleton's neighbor. Except maybe living next door to Beyoncé and JAY-Z... And at only £700 a month for rent, you'd be foolish not to apply, if you're able to relocate across the pond, of course. Who knows, you just may get invited to backyard barbecues at Prince William and Middleton's house if you get it, and your kids could totally be BFFs with Prince George, Princess Charlotte, and Prince Louis.