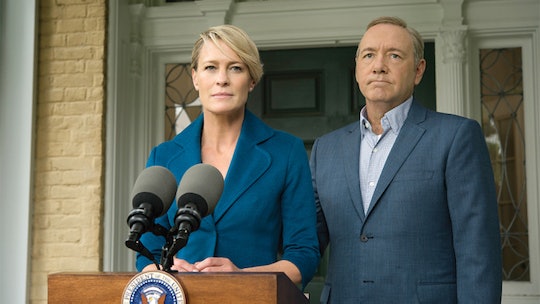 While it's true that the main focus of Friday, Jan. 20 centered around the presidential inauguration, you can always count on Frank Underwood to steal the political thunder. Netflix has announced the House of Cards Season 5 premiere date with the help of a very dark and dreary promo, which some may argue was very fitting, considering who was just sworn into office. House of Cards has always been about corruption in the White House to the most extreme sense of the word, so it's no surprise that he wanted some of all this political attention focused on him and his dark, dreary plans for the country's future.

As the promo opens up, you hear children reciting those very familiar words of the Pledge of Allegiance as the camera zooms out to show an American flag hanging upside-down. No words are actually spoken from the characters themselves, but when you think about it, they don't need to speak. The message of the video is clear. Despite what those words of "liberty and justice for all" are supposed to represent, the dark and ominous tone speak volumes at the kind of justice the Underwood administration intends on carrying out. And it will all play out on May 30, 2017.

But just in case the promo alone isn't enough to really send chills down your spine, the official House of Cards Twitter account captioned the post with the words: "We make the terror." So whatever ends up happening throughout the show's fifth season, you better believe it won't involve sunshine and rainbows. Much like the weather for today's inauguration, it's going to be gloomy and dark and the stuff nightmares are made of.

It's also worth noting that this will be the first season the show won't have series creator Beau Willimon leading the charge behind the scenes. For Season 5, the job of showrunner will go to both Melissa James Gibson and Frank Pugliese, who will share the responsibilities. So it'll be interesting to see how this change of authority will impact the tone of the show moving forward. But based on this promo alone, I'd say Frank Underwood will still be as devious and diabolical as ever. So don't worry, my friends — our favorite political villain will continue to try to make America great again under his own corrupt rule. Huh, why does that sound so familiar?