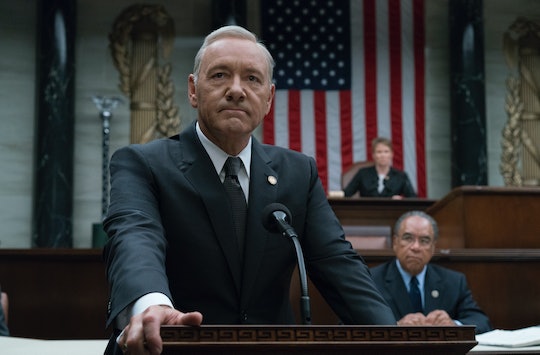 It was recently announced that the Netflix series House of Cards would be returning for its sixth and final season, but now production is in a momentary pause. Deadline reported that House of Cards has suspended production indefinitely following allegations of sexual misconduct by Kevin Spacey that came to light in the last few days. Netflix and Media Rights Capital, which produced the show, released a joint statement to Romper commenting on the production shutdown:

"MRC and Netflix have decided to suspend production on House of Cards Season 6, until further notice, to give us time to review the current situation and to address any concerns of our cast and crew."

Update: On December 4, Netflix announced that the final season of House of Cards would continue without Kevin Spacey.

Earlier: In an interview with BuzzFeed, actor Anthony Rapp alleged that Spacey made sexual advances on him in 1986, when Rapp was 14 and Spacey was 26. According to Rapp, the two had become friendly because they were both working on Broadway at the time. Rapp attended a party at Spacey's apartment and at the end of the night, Rapp alleges that Spacey drunkenly placed Rapp in his bed and climbed on top of him. "He was trying to seduce me," Rapp told BuzzFeed. "I don't know if I would have used that language. But I was aware that he was trying to get with me sexually."

Rapp said that he felt compelled to come forward about his experience because of the explosion of allegations against Harvey Weinstein that have been dominating the media over the last few weeks. "And not to simply air a grievance," Rapp said, "but to try to shine another light on the decades of behavior that have been allowed to continue because many people, including myself, being silent. [...] I'm feeling really awake to the moment that we're living in, and I'm hopeful that this can make a difference."

Spacey responded to Rapp's allegations on Twitter with a statement of his own. He said that he had no memory of the encounter, but owed Rapp an apology if it had occurred, describing his own actions as "deeply inappropriate drunken behavior." Spacey then chose to address the decades-long rumors about his sexuality by coming out, which was interpreted by many as an attempt to deflect attention from Rapp's accusation. Spacey was criticized by many for that, as well as for conflating his sexuality with inappropriate behavior towards a minor. As of yet, he has not commented on the criticism of his original statement.

In the wake of this situation, the future of House of Cards became uncertain. Production has stopped for now with no statement on when it will continue. It seems both Netflix and MRC are determining how best to proceed, but a decision hasn't been reached yet. As reported by Deadline, executives from both companies arrived in Baltimore, where the show is filmed, "to meet with our cast and crew to ensure that they continue to feel safe and supported" because they were "deeply troubled by last night's news concerning Kevin Spacey."

Neither Netflix nor MRC have implied that House of Cards might be cancelled (based on currently available information, it really does seem like they are still trying to figure out what the next step should be), but it can't be entirely discounted as a possibility. The show was already nearing its end, and it's difficult to see how it could proceed at the moment with all of the criticism Spacey had received both for his behavior and his response to it. Perhaps the show could find a way to continue without Spacey but right now, it's impossible to say.

More Like This
Chris Pratt & Katherine Schwarzenegger Welcomed A Baby Girl With The Prettiest Name
Mom Gave Birth On The Side Of The Road... With Her Five Other Kids In The Car
Operation Fly Formula Begins With 78,000 Pounds Of Baby Formula
What Is Monkeypox & Should You Be Worried? Here’s What You Need To Know