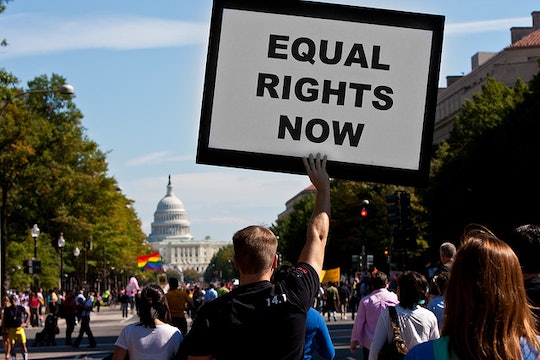 Houston Equal Rights Ordinance Rejected By Voters, But Some Say The Fight Is Not Over Yet

Tuesday, on election day 2015, voters in Houston rejected an equal rights ordinance protecting LGBT citizens from discrimination — to the joy of conservatives and dismay of LGBT and other advocacy groups. After an 18-month-long campaign that included rallies, protests and legal battles, the ordinance was overwhelmingly defeated in a vote of 61 percent to 39 percent, despite high-profile support from the White House, presidential candidate Hillary Clinton, and even tech company Apple. Critics of the measure hailed the outcome as a win for traditional values and religious freedom, while supporters of the ordinance argued that the loss really came down to conservative fear-mongering over the claim that allowing transgender women to use women’s bathrooms would make women vulnerable to sexual predators. Despite the major setback for the LGBT community, Houston mayor Annise Parker has vowed to continue to rally for the equal rights measure, telling supporters that the fight is not over.

The proposed equal rights ordinance would have applied specifically to businesses in Houston that serve the public, including restaurants, hotels, and housing (and, one would imagine, bakeries and wedding photographers?). If residents felt discriminated upon based on their gender or sexual orientation, they could file a complaint with the city. Fines for discrimination would be as high as $5,000, although religious institutions would be exempt.

Supporters of the ordinance believed that this kind of legal protection was long overdue, but critics saw it as an attack on religious freedoms motivated by an attachment to political correctness. Opponents included conservative pastors and other members of the Houston religious community, religious advocacy group the Family Research Council, as well as local and state officials. On the rejection of the ordinance, Texas Lieutenant Governor Dan Patrick released a statement saying that the vote was really about “allowing men to enter women’s restrooms and locker rooms," which defied “common sense and common decency.”

Although the future for equal rights protection in Houston is unclear at the moment — Mayor Parker, a lesbian, is coming to the end of her two-year term, and the issue may or may not be picked up again by the city’s next mayor — LGBT activists are vowing to continue their support for legal protection. Speaking to supporters on election night, Parker promised "that justice in Houston will prevail. This ordinance, you have not seen the last of. We're united. We will prevail.”