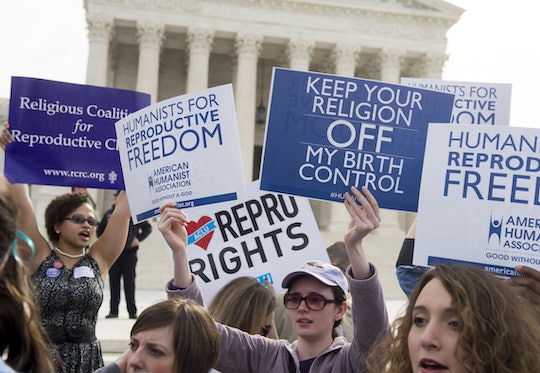 Americans, and the world at large, will continue to debate for the next two months about just how big of an impact a Trump presidency will ultimately have. While some of President-elect Donald Trump's campaign promises are unconstitutional, and therefore unlikely to see fruition, one thing is certain: he will be appointing a new Supreme Court justice. He's promised to appoint a "pro-life" (read: anti-abortion) judge, and many are speculating that this could lead to Roe v. Wade being overturned. Besides the obvious result of banning abortion, this could lead to a federal personhood law, which could criminalize the IUD and other forms of hormonal birth control.

Spurred by Trump's promise to repeal the Affordable Care Act (also known as Obamacare) during his first 100 days in office, Vice reported that women's interest in IUDs has surged, but their lawfulness could soon be called into question due to bad science. Hormonal IUDs, and other forms of hormonal birth control such as the pill, patch, ring, shot, and implant, use a hormone called progestin to prevent ovulation and thicken cervical mucus to impede sperm. They were once thought to be able to prevent implantation of a fertilized egg, should one slip through the cracks, but scientists say that there's no proof that birth control prevents implantation, according to The New York Times.

Still, even if birth control did prevent fertilization, that is not an abortion. Fully half of all fertilized eggs don't make it to implantation, according to the University of California, San Francisco, but when women eventually expel this single cell — yes, a fertilized egg is just a single cell — we don't call that a miscarriage; we call it a period. For those unclear on how a baby is formed, an egg is not a person. An embryo is not a person. Even a fetus is not a person, according to not only scientists (whose word alone should be enough) but the Supreme Court, which ruled in Roe v. Wade that "the word 'person,' as used in the Fourteenth Amendment, does not include the unborn."

But if that gets overturned, then any number of personhood laws not based in fact could crop up, ruling that a person could also be defined as a fetus, a fertilized egg, or a twinkle in a daddy's eye. And if someone believes that bit of fiction because it suits their narrative, it's no stretch of the imagination to assume they'll argue that IUDs and other forms of birth control prevent implantation, a claim that's still on WebMD today. The American Congress of Obstetricians and Gynecologists strongly opposes personhood laws, because they jeopardize women's rights to abortion and contraception, and also interfere with in-vitro fertilization (during which embryos are created and possibly destroyed) and terminating ectopic pregnancies, which, if untreated, can be deadly. If the Trump administration truly believes that a single, unviable cell holds more value than a woman, we should demand that they come right out and say it.