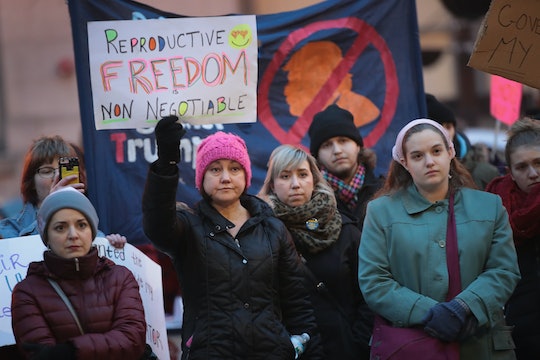 After a rare tie-breaking vote from Vice President Mike Pence on Thursday — his third since taking office — states may soon be allowed to withhold federal funding from family planning providers, such as Planned Parenthood. The move would lift restrictions put in place by the Obama administration, which blocked states from defunding these clinics for political reasons. In this case, those reasons were mostly to block these healthcare providers from providing abortions, though they were often masked by other wording. But this latest development doesn’t only affect women’s access to the controversial medical procedure — a cut like this to Title X funding would limit access to preventative care as well. Here’s how.

Because many family planning clinics, like Planned Parenthood, also offer abortion services, the lack of funds would put all of the other vital healthcare services they provide at risk, too. That’s because although none of this government money can be used for abortions — except in the case of rape, incest, or if the mother’s life is in danger, under the Hyde Amendment — without the financial help of Title X grant funding, these clinics may not be able to survive for long. Therefore, the women who depend on these services may not be able to get access to the health care they need that allows them to see doctor and stay on stop of their health, or seek treatment before a condition becomes more serious and more expensive to treat.

Preventative care services are meant to improve the nation’s health and if Americans have affordable access to these, overall spending to find and treat diseases and conditions sooner should decrease as well. For women, these services include screenings for cancer (including cervical and breast), mental health, chronic diseases, as well as HIV and sexual transmitted infections. These benefits also include immunization vaccines, such as the flu shot and HPV, as well as counseling for alcoholism, smoking, and eating disorders.

If people are aware of whether they have or are at risk of any disease, condition, or illness before it becomes more serious, then they can get in front it before their medical bills pile up. But because healthcare is so expensive in the United States, cutbacks to Medicaid and Title X funding could make it much harder in the future for the 4.6 million people who have already been helped each year by the women's healthcare services these family planning clinics provide.

Since the Affordable Care Act passed, 55 million have women gained access to these vital preventive services at no cost, which has saved women $1.4 billion annually, The Intercept reported earlier this month. While it's been the GOP's mission to defund Planned Parenthood because it provides abortions, meeting their political agenda this way hurts women in so many other ways and the ripple effect will be profound.